The latest FOMC meeting and subsequent comments from Chair Yellen have increased the likelihood of a December rate hike.

This chart shows the implied likelihood of a rate hike compared to steady policy from fed funds futures for the December meeting.  In early December, the projected odds of a hike were just above 30%; those odds have recently jumped to over 70%.  Although the core personal consumption deflator remains well under 2%, which is considered the target of the central bank, Chair Yellen indicated that tight labor markets raise the chances that inflation might rise quickly and force the Fed to boost rates sharply, potentially triggering a recession.  By raising rates when inflation is below the inflation target, the FOMC hopes to avoid a rapid increase in rates.

Most members of the FOMC base their policy decisions on the Phillips Curve, which postulates that there is a relationship between unemployment and wages, and if the latter rises, inflation tends to follow.  This idea has become increasingly controversial as the relationship between wages and inflation has weakened over the past two decades. 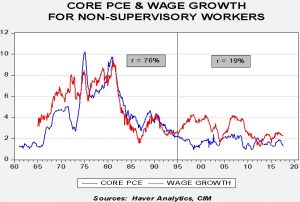 This chart shows the yearly change in core PCE and wage growth for non-supervisory workers.  Note that the correlation broke down after 1995.  We believe this is because the full impact of deregulation and globalization has put a lid on inflation and thus wage changes have less impact on price levels. 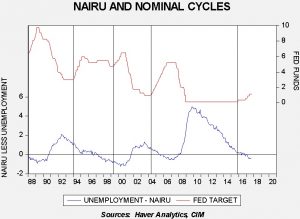 The key concept for the Phillips Curve is the Non-Accelerating Inflation Rate of Unemployment (NAIRU), which is the unemployment rate that is the lowest possible rate an economy can achieve without triggering inflation.  The idea is that if unemployment falls below NAIRU, the labor markets become too tight, triggering excessive wage growth and inflation.  The above chart shows the Greenspan-Bernanke-Yellen Federal Reserve.  We have put vertical lines where tightening cycles began.  Note that Greenspan began two tightening cycles while the unemployment rate was above NAIRU (1994, 2004) but waited to raise rates until 1998 when the unemployment rate was well below NAIRU.  The latter tightening cycle was a rather famous one; Greenspan held that rising productivity would keep inflation under control and thus waited to raise rates.  Notably, Janet Yellen, a Fed governor at the time, lobbied hard for raising rates sooner due to the drop in unemployment.

The current tightening cycle began with the unemployment rate very close to NAIRU, which is consistent with Chair Yellen’s thinking on inflation.  So far, wage growth has remained subdued.  Since the early 1980s, wage growth has usually exceeded 4% when the unemployment rate falls below NAIRU.  It is currently 2.3%.  It is unclear why wage growth is so weak relative to what appears to be a tight labor market.  That is what makes boosting the policy rate risky.  Since the meeting, we have seen the dollar strengthen and bond yields rise.  However, the odds of a policy mistake, though currently low, are rising.  This is an issue we will be monitoring closely in the coming months, especially as the president chooses not only a new Fed chair but also a vice chair and two other open governor positions.