Many investment managers think of “foreign equities” as one big, monolithic asset class and leave it at that.  When setting a portfolio’s asset allocation strategy, many simply assign a certain percentage to the asset class and implement it by investing in a broad international index fund.  Here at Confluence, we go a step further by identifying individual countries that may be attractive based on our analysis of their geopolitical power, economic performance, social developments, and financial dynamics.  We think the current negotiations for a post-Brexit trade deal between the European Union and the United Kingdom offer especially rich insights into the relative power and prospects of the various EU member states and the U.K.  Our analysis suggests the EU’s Central European members and the U.K. may be especially well placed to outperform economically in the coming years.

At first glance, the EU would seem to have immense leverage in the post-Brexit trade talks because its exports to the U.K. make up only a small part of its total trade and economic activity.  In theory, the EU could easily walk away from the negotiations and accept any trade barriers that would snap into place under a “hard Brexit.”  In contrast, the U.K. would stand to lose a huge chunk of its exports and economic activity, which would supposedly force it to make significant concessions.  To illustrate, the chart below shows that only about 6.0% of the EU’s merchandise exports went to the U.K. in 2019 (the red line in the chart).  For Ireland and a few other big EU members, the U.K. represented as much as 10.3% of exports (the blue columns), but no EU member came close to the U.K.’s dependence on cross-Channel trade.  Fully 46.0% of the U.K.’s foreign merchandise sales went to the EU (the gold line). 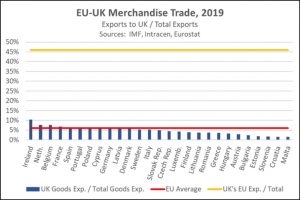 Despite the EU’s apparent negotiating advantage, however, all indications are that the U.K. is holding its own in the talks.  Last week, for example, a British threat to walk away from the negotiations brought the EU back to the table with promises that it would be willing to compromise on the remaining issues of fisheries and corporate subsidies.  A close look at the following graph suggests why the EU may have less leverage than expected.  The red line in this graph shows that, on average, EU members’ exports to the U.K. represent only 2.2% of their gross domestic product (GDP).  The gold line shows that the U.K.’s exports to the EU represent fully 7.6% of its GDP.  But the key story is revealed by the blue columns, which show each individual EU member’s merchandise exports to the U.K. as a share of its GDP.  Besides the obvious dependency of close neighbors like Ireland, Belgium, and the Netherlands, what’s notable is that the Central European states like Slovakia, the Czech Republic, Poland, and Hungary are also unusually dependent on shipments to the U.K. 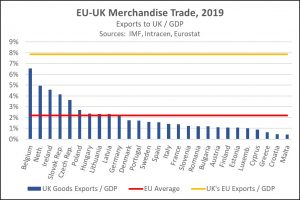 The Central Europeans clearly have a strong interest in maintaining close EU trade ties with the U.K.  The Poles and Hungarians have also recently been at odds with the EU leadership over what some see as their authoritarian political and judicial policies.  In other words, even if the EU leadership in Brussels would prefer to play tough with the U.K. and risk a hard Brexit, the Central Europeans would probably oppose the move.  But do the Central Europeans really have the power to thwart Brussels?  The answer is “yes.”  The reason is that most major EU decisions ultimately need to be approved by all member states.  The Central Europeans have leverage over Brussels because they can threaten to withhold their approval for major legislation, budgets, trade deals, and the like, whether they’re related to the issue at hand or not.  The EU negotiators therefore have to be cognizant of the Central Europeans’ interests and likely can’t risk being so tough on the U.K. that a trade deal falls apart.

More broadly, the need for unanimous decisions means the EU as a bloc will continue to be hamstrung politically.  Indeed, former European Commissioner Romano Prodi recently said in an interview that, “Europe’s enemy is unanimity. . . In this moment I’m pessimistic about [change.]  Unanimity will go on in the major issues, at least in the foreseeable period of time, unless there will be a quick realization that this will kill Europe.”  On a more positive note, however, these dynamics suggest the Central Europeans will continue to use their leverage to win economic and political concessions from Brussels.  Meanwhile, the U.K. and other countries negotiating with the EU on various issues will probably learn that they can exact concessions by “playing the Central European card.”  In sum, these political dynamics suggest the U.K. could well end up with a favorable post-Brexit trade deal and the Central Europeans will likely be able to protect their economic interests fairly well in the coming years, making both more attractive investment destinations than would otherwise be the case.