One of the earliest lessons taught in statistics is that “correlation does not equal causality.”  Any relationship that exists between two variables usually rests on a myriad of conditions; if any of these conditions change, correlations can break down rapidly.  This doesn’t mean that correlation isn’t a useful tool but it show that one must be aware of the conditions that support the relationship.  If those conditions prove to be unstable, the resulting correlation can be unreliable.  In addition, when a correlation breaks down, it’s important to figure out why.  Sometimes the change in correlation is understandable; in other circumstances, it can signal more ominous problems. 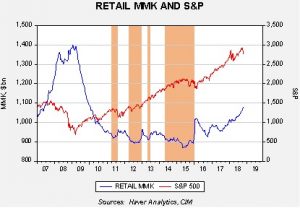 It appears that this relationship is breaking down.  We have seen choppy equity performance this year with money market funds continuing to rise; in other words, households have levels of cash available that, in recent years, would have led to equity purchases.  So, why did this relationship break down?  Although there could be a myriad of reasons, here are the two we think are most likely. 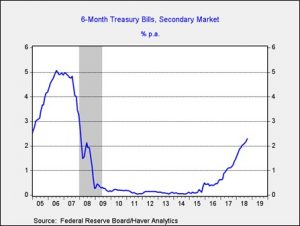 This chart shows the six-month T-bill rate; in the middle of 2015, the yield was a mere 9 bps.  The current yield is 2.29%.  Although this is still a low rate historically,[1] the perceived penalty for holding cash is much less onerous than three years ago.

There are rising levels of fear among investors.  Fear is hard to define but here are three potential concerns that are probably reducing enthusiasm for equities. 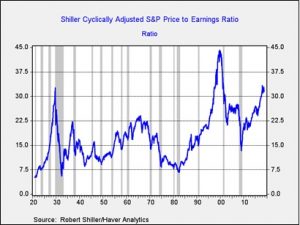 This chart shows the Schiller CAPE.  Although there were occasional bounces when the P/E rose above 15x after the Great Depression, it wasn’t until the late 1950s that we saw a sustained rise in multiples.  That has not been the experience of the equity market thus far but the market has also been supported by extraordinary policy support.  Although anecdotal, in our travels talking to investors, we hear a nearly universal comment that, “I can’t suffer through another event like 2008 again.”  Thus, it would not be unreasonable to see investors move to cash if they see even faint signs of recession.

So, what do we glean from this analysis?  Rising rates are looking attractive to some investors, especially those with high levels of risk aversion.  At the same time, even 3.0% on T-bills isn’t much of a return and probably has had a limited impact on equities.  The fear section is more telling.  If the primary fear is overly tight monetary policy, then any hint of a pause should be bullish for equities.  That’s especially true given high cash levels.  A regime change in inflation is perhaps the greatest threat; there are clearly changes occurring that are worrisome but the general realization that the regime has changed takes time.  We are watching this issue carefully but, so far, we are not ready to declare a change.  If regime change were the primary factor, long-term interest rates would be rising much faster.  The fear of another 2008 will be with investors for a generation.  That fear may lead to more frequent corrections, especially under conditions where monetary policy isn’t overtly accommodative.  In some respects, that is a healthier situation for equity markets as it reduces the odds of bubbles.  Our take is that the primary factor behind the rise in cash is monetary policy tightening.