The financial markets have been roiled recently by the apparent shortage of liquidity in the repo markets.  Our take is that the problem is twofold—there are regulatory problems that mean the banking system requires more in reserves than it did prior to the Great Financial Crisis, and there are likely industry concentration issues that are exacerbating the issue.  Although we don’t expect the repo situation to become a systemic problem, there are potential second order effects that could affect financial markets.

Ultimately, the repo situation makes it clear that the Fed has reduced its balance sheet more than it should have.  Therefore, the fix will require expanding the balance sheet again.  As a result, other than to calm the short-term money markets, we have been searching to figure out what other markets might be affected by a new expansion of the balance sheet.

When the Bernanke Fed implemented the three phases of quantitative easing (QE), one of the overlooked areas of impact was the dollar. 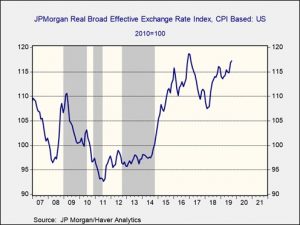 The areas in gray show periods of QE; in the first two events, the dollar clearly weakened.  In the third episode, the dollar did weaken going into the event but mainly was steady at low levels.  However, the dollar soared as the Fed signaled the end of QE.

One way to examine the effect of the balance sheet on the banking system is to monitor free reserves.  These are banking reserves that are above the level of required reserves. 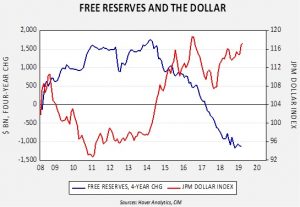 This chart examines the relationship between the four-year change in free reserves and the JPM dollar index.  The key point is that the level of reserves matters less to the dollar than the direction of change.  If the Fed begins to reflate its balance sheet, it will likely cause free reserves to rise.  That action will likely be dollar bearish.  Although monetary aggregates are not the sole driver of the path of the dollar, given that other measures have suggested the dollar is overvalued, a return to some sort of QE should be considered a bearish event for the greenback.  In general, a weaker dollar is bullish for gold and commodities, along with foreign equities, especially emerging markets.