Over the last half-decade, one of the most dramatic developments in finance has been investors’ embrace of cryptocurrencies such as Bitcoin.  Once considered merely an exotic technology with little relevance to investment portfolios, Bitcoin has now become a popular tool for investing.  One reason for its popularity is that some investors see Bitcoin and other cryptocurrencies as a substitute for gold and other precious metals in the face of the currency debasement implied by today’s loose fiscal and monetary policies.  This report takes a quick look at whether Bitcoin can really be seen as a substitute for gold.

Although Bitcoin was invented in 2008, we rely on the pricing data from cryptocurrency exchange Coinbase starting in 2015, when Bitcoin trading really began to take off.  As shown in the chart below, Bitcoin prices and gold prices have both risen from the beginning of 2015 to the present.  Over the entire period, weekly Bitcoin and gold prices have had a positive correlation of approximately 0.71.  Similarly, a simple regression model relating Bitcoin prices to gold prices suggests a strong positive relationship between the two.  In that model, the weekly change in gold prices explains almost half the weekly change in Bitcoin prices. 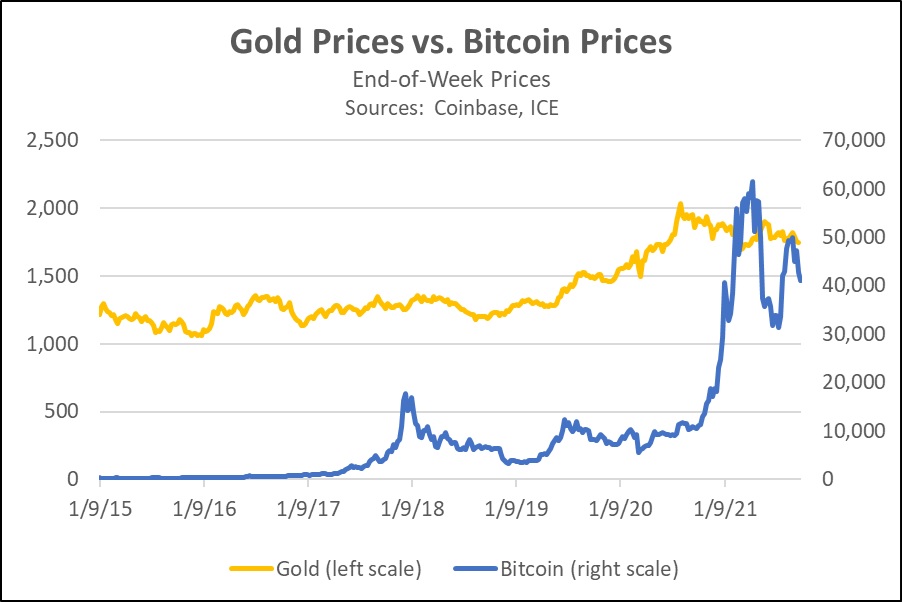 Even though Bitcoin and gold prices have both risen over the last six and a half years, Bitcoin has often diverged widely from the trend in gold prices, and our analysis suggests the relationship between the two assets has recently flipped.  As shown in the chart below, actual Bitcoin prices since mid-2020 have diverged widely from what the long-term relationship would suggest. 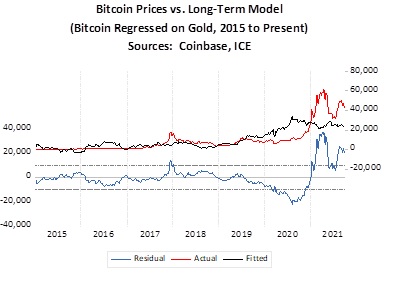 Importantly, a shorter-term model relating Bitcoin prices to gold prices only from August 2020 to the present suggests their relationship has reversed, most likely because investors now see Bitcoin as a true substitute for gold rather than just a complementary asset as in the prior period.  Since August 2020, the correlation between Bitcoin and gold prices has come in at -0.80, suggesting that rising Bitcoin prices are now associated with falling gold prices.  A short-term regression model covering August 2020 to the present not only confirms that the two asset prices now move in opposite directions, but the model also does a better job of explaining the change in Bitcoin prices.  One version of the short-term model using gold prices lagged by four weeks and explains almost 70% of the change in Bitcoin prices. 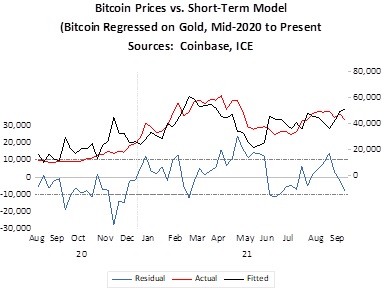 This evidence suggests that as Bitcoin trading expanded and more investment funds have been channeled into the asset, it has taken on the characteristics of a substitute for gold.  At first glance, this makes sense.  As the world’s fiat currencies are increasingly threatened by loose fiscal and monetary policies, the limited supply of Bitcoin makes it look like it could retain its value, just as the limited supply of gold does.  Indeed, Bitcoin has features that are even more attractive than gold, such as being much easier to transfer among investors and cheaper to hold (you don’t need a warehouse or security guards for your Bitcoin, after all!).  All the same, we think investors should be wary about trying to substitute Bitcoin for gold.  As we saw in China over the last week, governments intent on preserving their sovereignty and issuing their own central bank digital currencies could outlaw Bitcoin and other cryptocurrencies at any time or at least impose onerous regulations that would undermine their value.  In other words, investors looking to protect themselves from currency debasement should probably continue to favor gold and other precious metals over cryptocurrencies.