This week, the Social Security Administration announced that Social Security retirement and disability benefits will rise 5.9% in 2022, bringing the average retirement benefit to an estimated $1,657 per month (see chart below).  The increase, which will be the biggest since 1982, will boost the average recipient’s monthly benefit by about $92.  The benefit rise was right in line with expectations, given that it is computed using a special version of the Consumer Price Index (CPI) that is widely available.  The COLA process also affected some other aspects of Social Security, although not necessarily by the same 5.9% rate.  For example, the maximum amount of earnings subject to the Social Security tax was hiked to $147,000, up 2.9% from the maximum of $142,800 in 2021. 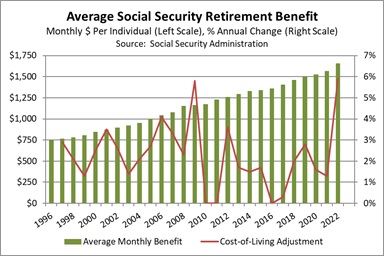 Media commentators often fret that the Social Security COLA could be “eaten up” by rising prices in the following year or that the benefit boost could provide a windfall if price increases slow down.  In truth, the COLA merely aims to compensate beneficiaries for price increases over the past year.  It’s designed to maintain the purchasing power of a recipient’s benefits given past price changes.  Price changes in the coming year will be reflected in next year’s COLA.

For the overall economy, the inflation-adjusted nature of Social Security benefits is particularly important.  Since so many members of the huge Baby Boom generation have now retired, and since more and more people are drawing disability benefits than in the past, Social Security income has become a larger part of the economy (see chart below).  In 2020, Social Security retirement and disability benefits accounted for fully 5.2% of the U.S. gross domestic product (GDP).  Having such a large part of the economy subject to automatic cost-of-living adjustments helps ensure that a big part of demand is insulated from the ravages of inflation, albeit with some lag.  In contrast, if Social Security income were fixed, a large part of the population would see their purchasing power drop sharply, which not only might reduce demand but could also spark political instability. 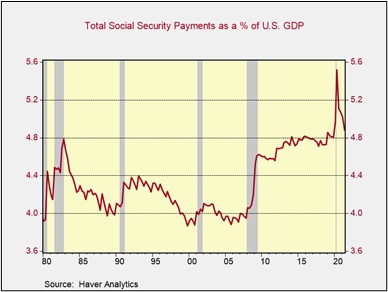 Finally, it’s important to remember that an individual’s own Social Security retirement benefit isn’t just determined by inflation.  The formula for computing an individual’s starting benefit is driven in part by wage and salary history.  Higher compensation will boost a retiree’s initial retirement benefit, which will then be adjusted via the COLA process over time.  As average worker productivity increases, average wages and salaries have tended to grow faster than inflation, and as a result, the average Social Security benefit has grown much faster than the CPI.  Over the last two decades, the average Social Security retirement benefit has grown at an average annual rate of 3.2%, while the CPI has risen at an average rate of just 2.2%.  In sum, Social Security benefits provide an important source of growing purchasing power that helps buoy demand and corporate profits in the economy.