With the elections coming next week, it seems like a good time to look at how markets have historically performed during election cycles.  We will compare the current election cycle against previous cycles. 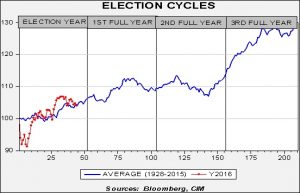 The blue line in the chart above shows the indexed market return for the period 1928-2015.  To create this average cycle, we use the weekly returns of the S&P 500 Index starting with the first week of the election year through the end of the fourth year of the presidential term.  The weekly dataset begins in 1928.  The average gain in the first year of the cycle is about 6%.  By Q3 of the second year of the cycle, the average return of the S&P 500 is approximately 13%.  Equity markets move sideways to lower into late Q3 of the third year and then, on average, stage a strong rally into the last year before the election cycle begins anew.  The rally that begins in year three is a fairly well documented phenomena; politicians want to be re-elected and thus create policies that boost growth and, on average, lift equity prices as well.  We have added the S&P 500 performance for the current cycle, indexed to the first Friday close of 2016 (red line).  Although the market has been volatile, its performance has been close to average since the dip in Q1. 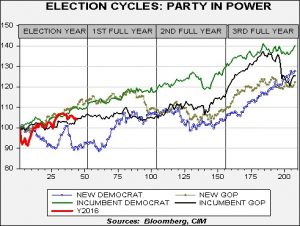 Although most analysts are assuming a Clinton win based on polling, this analysis does suggest some equity market trepidation as we are currently underperforming both of the most probable outcomes.[1]  This underperformance could reflect the volatile nature of this election season or expectations of monetary policy tightening in December.  However, given the usual electoral pattern, we would not be surprised to see a stronger equity market into at least the first half of next year.

[1] It is possible a third party could win, but highly improbable.  The most likely outcome is either an incumbent Democrat or a new Republican.