As the FOMC raises rates, there are increasing concerns about the credit markets.  After a long period of low rates, credit spreads are starting to widen, raising fears of financial stress.  In this report, we will look at these concerns.

First, here is what we are seeing with credit spreads: 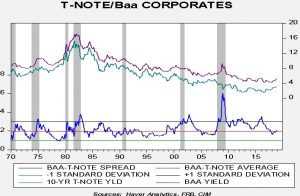 This chart looks at the spread between 10-year T-notes and similar term Baa corporates.  The average and standard deviation lines are calculated from 1921.  Currently, the spread is about average but it has been widening recently.

Second, here is the impact of monetary policy on credit spreads: 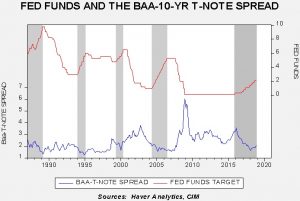 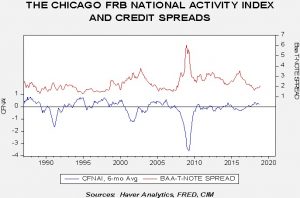 This chart shows the Chicago Federal Reserve Bank’s National Activity Index along with the T-note/Baa credit spread.  The national activity index uses 85 variables to track the economy; we smooth the raw data with a six-month moving average.  A reading of zero indicates an economy growing at trend.  Thus, a reading below zero suggests a weakening economy.  Note how credit spreads widen when the index dips below zero.  The two series are correlated at -71.9%.  A regression based on this relationship suggests that the recent widening of the T-note/Baa spread is mostly a rise toward fair value. 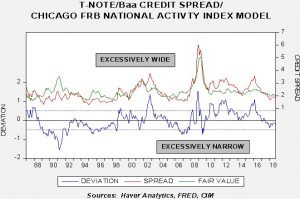