The 10-year Treasury yield has recently been trending upward. 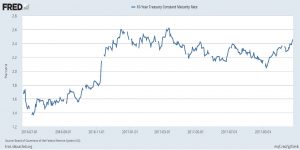 Since early September, yields have risen from 2.06% to 2.46%.  What’s behind this rise and do we expect it to continue?

We use our 10-year T-note model for guidance.  It estimates the fair value level of the 10-year T-note yield based on the long-term average of inflation, fed funds, German long-dated sovereign yields, the yen/dollar exchange rate and oil prices. 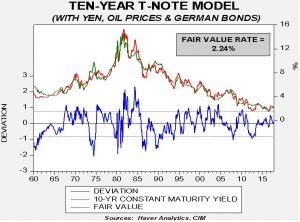 Based on these factors, the current fair value is 2.24%, a bit lower than the current yield.  At the end of 2016, fair value was 1.96%, so the fair value rate has been moving higher.  The primary reason has been a modest rise in German yields, rising fed funds and higher oil prices.

What do we see going forward?  The two independent variables that have the most potential for pushing the fair value higher in the near term are fed funds and German yields.  If the fed funds target rises to 2.25% by the end of next year and nothing else changes, the fair value yield would rise to 2.78%.  If German bunds were to rise in yield to 0.75% at the same time, the fair value yield would rise to 2.80%.  Thus, the primary worry is monetary policy.  As we discussed last week, given the FOMC’s voting roster next year, the FOMC will be unusually hawkish in 2018, so the odds of higher yields are rising.