(NB: Due to the Thanksgiving holiday, the next report will be published on December 6.)

The health of the consumer is critical to the future path of economic growth.  For the most part, consumption is accounting for most of the growth in the economy. 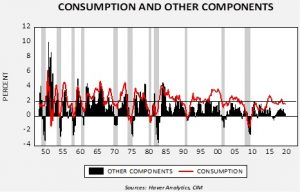 Household debt plays a role in consumption.  The New York FRB has a data series on consumer debt that has just been recently updated.  The balance of household debt is now $13.95 trillion, a new record high.  However, on a per capita basis, we remain below the previous record. 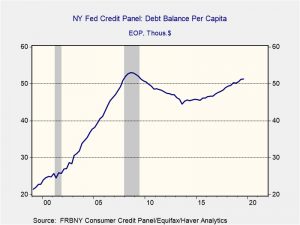 As a percentage of the total, housing debt has been declining relative to auto and student loans. 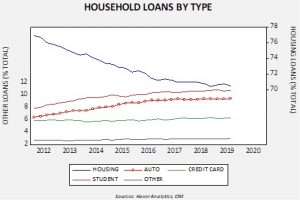 In 2012, housing represented about 76.9% of outstanding household loans; it now stands at 70.5%.  Both student and auto loans have increased.  The median credit score for mortgages is a rather strong 763. 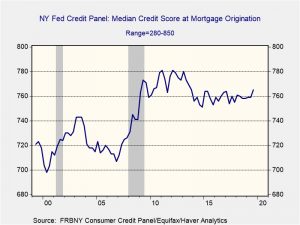 Auto loans is a bit lower, at 710, but credit quality has been improving, mostly a reflection of higher delinquencies.  Lenders appear to be increasing their caution. 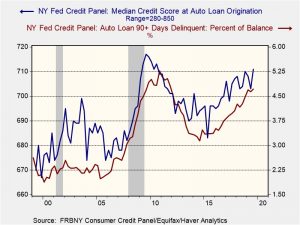 Overall, the data suggests that the areas of greatest concern are auto and student loans; lenders do appear to be addressing the auto loan issue by becoming more selective in granting credit.  Student loans, which have a 90+-day delinquency rate of around 10% since 2012, are ultimately a public policy issue, but until this issue is resolved these loans will have an adverse impact on spending.  If there is going to be a financial crisis, this data would suggest it probably won’t come from the household sector.