In the aftermath of the election and favorable news on vaccine progress, we have seen a notable backup in interest rates.  The 10-year T-note yield is flirting with 1%.  In this report, we will examine the future path of long-duration interest rates.

We start with our 10-year T-note yield model. 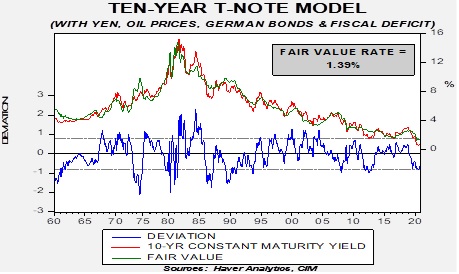 The model, which uses fed funds, the 15-year average of CPI (an inflation expectations proxy), the JPY/USD exchange rate, oil prices, German 10-year bond yields, and the fiscal deficit, suggests the fair value yield is near 140 bps.  Although this fair value is historically low, it is well above the current rate of around 90 bps.  In the absence of outside interference, it would not be unreasonable to expect yields to continue to drift higher.  However, we do expect weaker economic growth in Q4 2020 and Q1 2021, so the pace of increases may slow.

However, the potential for outside intervention is high.  The issue comes down to Federal Reserve policy.  The U.S. central bank has hinted at the possibility of yield curve control.  So far, the Fed has not taken concrete steps to implement fixing long-duration interest rates.  But a rapid rise in such rates would not be welcome because it would have an adverse effect on the mortgage and housing markets. 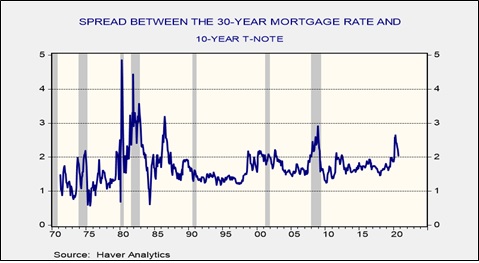 Mortgage rates, relative to the 10-year Treasury, spiked in April.  The spread has narrowed since then but remains above 2%, which is elevated.  If rising T-note rates lead to higher mortgage rates, it will tend to stifle part of the economy that is showing promise.  This may lead the Fed to try to slow the rise in long-duration interest rates.

At the same time, a low interest rate regime tends to act as a headwind for banks.  This factor may encourage the Fed to allow long-term rates to rise modestly.  But we doubt that policymakers would be comfortable with a 10-year T-note yield in excess of 1.25%.  If rates approach that level soon, we would not be surprised to see the Fed signal it isn’t pleased with the development.  And so, we may see a further rise in long-term interest rates, but a move to revert to the rate levels seen before 2008 is improbable.