Trumponomics looks as if it will be a combination of fiscal stimulus, trade restrictions and deregulation.  It looks very likely that environmental regulations will be reversed and there have been promises of financial deregulation as well.  The first two will likely reflate the economy.  Proposed deregulation may help hold down energy prices but financial services are not a major contributor to inflation (only about 0.24% in CPI) anyway.

With reflation on the horizon, we have seen a rise in the 10-year yield.  Even though we would expect a retreat in yield during the next recession, it is likely that the secular bond bull market that began in the early 1980s is coming to a close. 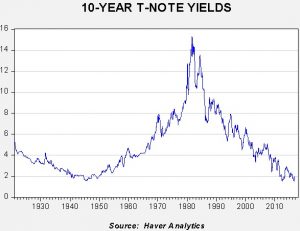 The chart above shows the 10-year T-note yield from 1921.  Perhaps the most important issue to remember is that when the last secular bear market began after the lows were made in 1945, the next peak took 36 years.  It took eight years before yields doubled.  Although the regulatory environment is different, it takes a while for bond yields to reach really high levels.  Still, the tailwind for financial assets that this bull market represents is noteworthy. 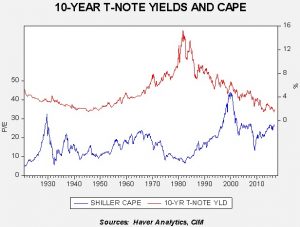 This chart shows the 10-year T-note yield and the cyclically adjusted price/earnings ratio (CAPE) that was developed by Robert Shiller.  The CAPE deflates earnings and stock prices and then averages earnings over a decade, generating a P/E that is designed to capture the underlying trend in real earnings.  Note that the P/E rose from 1950 to 1965 even though rates rose.  However, as inflation steadily increased, interest rates and the P/E moved in opposite directions.  Casual observation suggests that rates above 4% and rising lead to a lower multiple. 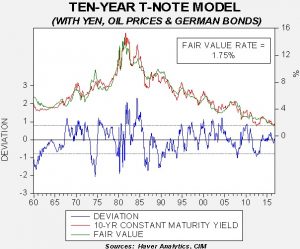 The model uses fed funds, the 15-year moving average of CPI (an inflation expectations proxy), the yen/dollar exchange rate, oil prices and German bond yields.  The most important variable keeping the fair value low are German bond yields; removing those from the model boosts the fair value yield to 2.42%.  In a less globalized world, the impact of foreign rates might be reduced, so there is a concern the model is underestimating the fair value yield.  However, as long as capital flows remain open, the impact of lower German yields should be a bullish factor for long-duration Treasuries.  In addition, if we assume a 25 bps hike in fed funds next month, the fair value yield would increase to 1.84%.

Overall, a case can be made that the recent spike in long-duration yields is overdone, at least in the short run.  On the other hand, as we discussed in the most recent WGR, if the U.S. retreats from the superpower role, inflation expectations will likely rise and weaken the case for holding long-duration instruments.  We continue to closely monitor the fixed income markets but it does appear that the long bull market in Treasuries may be coming to an end.