[Ed note: We will not publish an Asset Allocation Weekly Comment the week of November 24. The next comment will be published December 1.]

Over the past three weeks, we have seen a rise in the yields on high-yield bonds.  The Merrill Lynch High Yield bond effective index is up 40 bps since late October.[1]  There are a number of reasons for the sudden weakness.  They are: 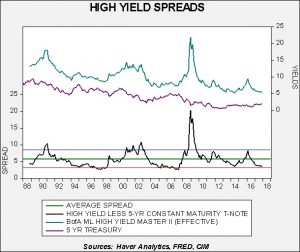 This chart shows the Merrill Lynch High Yield Master effective yield and the five-year T-note yield.  The lower lines on the chart show the average spread and the standard deviation lines.  The narrowing spread, by itself, doesn’t necessarily signal an imminent problem.  As the above chart shows, spreads can remain at the lower deviation for an extended period of time.  However, a spread at the lower deviation also suggests a market that is richly valued. 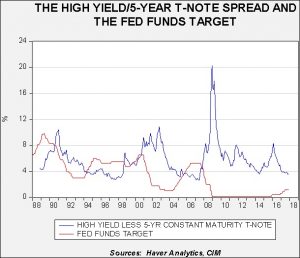 Although there has been much press in the financial media on the recent backup in yields, the most recent change is barely visible on the spread.  There isn’t any obvious increase in financial stress, and monetary policy, while tightening, is not at a level that indicates it is near the end of the cycle nor is it at a level that should be causing stress.  In our Asset Allocation portfolios, we have been reducing our exposure to high-yield bonds in the income-oriented programs due to high-yield spreads falling to the lower deviation.  However, we don’t expect that the recent rise in yields signifies the onset of a financial crisis.  Obviously, we will continue to monitor the situation but, for now, we are comfortable with our current allocations to this asset class.