The Trump victory has significant ramifications for the economy and markets.  The president-elect’s platform is somewhat ambiguous, which isn’t all that unusual; candidates want to build in some degree of flexibility that a detailed platform can reduce.  Despite this lack of clarity, there are elements that are emerging that offer a guide to the policy changes the new administration will likely implement.

We believe the key to Trump is his campaign slogan, “America First.”  Trump made it abundantly clear that he intends to conduct policy from the standpoint of whether it is best for America.  Although the term “America First” harkens back to an earlier movement,[1] Trump’s version appears broader, including both domestic and foreign policy.

So, what does an America First policy mean for the domestic economy?  Trump has promised both fiscal stimulation and trade restrictions.  The combination of these two policies contradicts the accepted economic orthodoxy since Reagan-Thatcher, which adopted globalization.  However, combining the two supercharges the domestic impact.  Why?  Because under conditions of globalization, some fiscal stimulus is lost to imports.

Globalization and deregulation began in earnest in 1978.  This chart shows the contribution to GDP from imports on a three-year average basis. 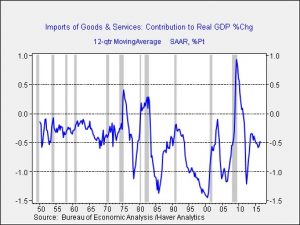 The pattern of imports clearly changes in the late 1970s, becoming a persistently larger drag on growth but also more volatile.  On average, from 1950 through 1977, imports reduced GDP by 31 bps.  From 1978 to the present, the average loss to imports nearly doubled, to 61 bps.  Trade restrictions will tend to add to real GDP; if Trump can reduce imports to the pre-1978 years, it would consistently add about 30 bps to GDP.  If fiscal stimulus adds 60 bps (the average that government spending alone added in Reagan’s first term), real GDP could rise nearly 1% per year.  This analysis does not include any rise in consumption that might coincide with changes in the income tax code or investment from reforms in corporate taxes.

Simply put, the combination of fiscal stimulus and import restrictions could lead to a sizeable boost to growth.  The downside to the policy is that it would certainly be inflationary.  One of the key elements to containing inflation over the past nearly four decades has been through globalization.  Trade impediments shift the aggregate supply curve toward the origin, meaning that price levels are higher at the same level of output.  But, in an economy that is struggling to boost price levels, the impact of higher inflation will be benign, at least for a while.

Higher inflation will raise interest rates.  We expect monetary policy to remain accommodative in the face of rising inflation due to political pressure on the Federal Reserve.  The dollar will likely rally because trade restrictions reduce the global supply of the U.S. currency, driving up the price.  The deflationary impact of a stronger dollar will be reduced because of fewer imports, although the imports that do arrive will be cheaper.

We will continue to monitor the progress of policy in the coming months.  But, in terms of asset allocation, our committee has started to address these changes and will be reacting in due course.

[1] The earlier America First movement, led by Charles Lindbergh just before Pearl Harbor, was designed to keep the U.S. out of a European war.