Last week, we discussed our views of the debt markets.  However, one item we didn’t examine was the dynamics of the yield curve.  The U.S. Treasury market has both a domestic and an international component.  While all sovereign debt markets have a domestic component, the international component is especially a factor for the U.S. because the dollar is the reserve currency.  In our Treasury model, we use inflation expectations and fed funds for domestic elements.  For foreign elements, we use the yen/dollar exchange rate, German bund yields and oil prices.  Our model suggests that the dynamics of the yield curve are affected primarily by the domestic component.

Shifts in the yield curve are driven mostly by a combination of monetary policy and inflation expectations.  As a general rule, short-duration instruments are more sensitive to monetary policy and less to inflation expectations.  Long-duration instruments have the opposite characteristics.   When we model the two-year Treasury and the 10-year Treasury, these characteristics are confirmed. 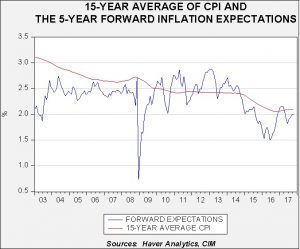 This chart shows the 15-year average of inflation compared to the implied five-year forward inflation rate from TIPS.  Although the moving average isn’t a perfect proxy for inflation expectations, it has worked as a measure of central tendency since 2009.  And, since the instruments haven’t been around for very long, it’s difficult to know how the average compares over a longer time frame.  But, for our purposes, it is a workable proxy. 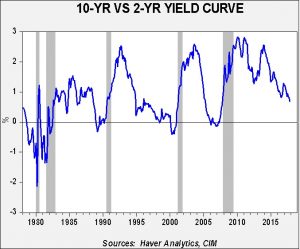 Currently, the two-year versus 10-year Treasury yield spread is above zero but the curve is clearly flattening.  If the FOMC continues to tighten into stable (or perhaps falling) inflation expectations, the yield curve could invert and perhaps signal the end of this long business expansion.