(NB:  Due to the Thanksgiving holiday, the next report will be published on December 3.)

The FOMC now has at least three vacant governor positions and two regional bank president positions.  There is one vacancy that remains from the Trump administration.  Richard Clarida’s vice-chair position expires in January.  And, this week, Governor Quarles, who was vice-chair for supervision, announced he would be resigning at the end of the year.  Quarles’s term as governor extended to 2032, but it is customary for chairs and vice-chairs to resign if they are not reappointed to their positions.  This custom exists to avoid the uncomfortable situation where a former chair or vice-chair would be on the board under a different regime.  It’s a bit like the idea that former managers shouldn’t stay in the dugout. 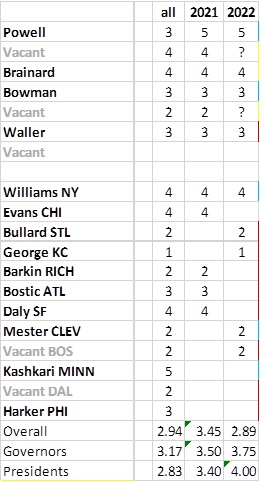 On the above table, the top seven are governors and vote every meeting.  The bottom 12 are regional presidents, who vote every three years, with the exception of the NY FRB president, who is also a permanent voter.  This table shows the FOMC with our current estimate of policy stance, with 1 being most hawkish and 5 most dovish.  We average the entire FOMC in the “all” column; the estimate is based on this year’s voting members and next year’s roster.  The gray names are vacancies.  Assuming Powell is renominated (which isn’t a certainty), there are three governor seats to fill.  Until those seats are filled, the FOMC is going to have a hawkish tilt compared to 2021.  Although we believe the Fed won’t raise rates before tapering is complete, if these three vacancies aren’t filled by mid-2022, Chair Powell could face a recalcitrant committee, one where dissents will be more likely.

Regarding the vacant president positions, regional Fed banks consistently tend to appoint the same types to these roles.  After all, they are appointed by local boards of directors, which tend to be composed of similar characters.  There have been proposals to require Senate approval for regional Fed bank presidents—although we don’t expect that to occur, the mere idea will likely encourage the regional Fed bank boards in Boston and Dallas to select moderates.

So, who will get the open governor slots?  The past few years have shown that the Senate won’t approve an unorthodox candidate.  President Trump tried to pick a few—Judy Shelton, Herman Cain, Stephen Moore, and Marvin Goodfriend—who didn’t make it through the nomination process.  Each held an unorthodox position.  Shelton seemed to want a gold standard, Cain held some rather odd fiscal positions, Moore was a libertarian supply-sider, and Goodfriend supported negative nominal interest rates.  The only successful candidate Trump selected as a new governor was Christopher Waller, who was the lead economist at the St. Louis FRB.

The lesson here is that the Senate prefers orthodoxy.  Here are some names we would expect to be considered: Jason Furman, Jared Bernstein, Sarah Bloom Raskin, Neel Kashkari, and Raphael Bostic.  Furman is considered a centrist and was a chair of the Council of Economic Advisers (CEA) under President Obama.  Bernstein was an economic advisor to then Vice President Biden and is currently a member of the CEA.  Raskin is a former governor and should be easy to approve.  Kashkari, currently the president of the Minneapolis FRB, would be a reliable dove.  Bostic is also well regarded and the president of the Atlanta FRB. The bottom line is that although these names would likely lean dovish, they don’t harbor positions that would be so unorthodox as to unsettle Senate members.  At the same time, Bernstein has opined that the dollar’s reserve currency status is, on balance, negative for the economy, which is controversial.  Kashkari wants higher bank capital requirements, which would not be popular with banks.

Although there are other names that would delight the progressives—Claudia Sahm and Stephanie Kelton—these nominations would be considered too radical, in our opinion, to pass the Senate.  Given the makeup of the FOMC in 2022, the president needs to move quickly to fill the governor roles or face a more hawkish Fed.