In our example, one-year interest rates in the Eurozone are 5.00% compared to U.S. rates at 2.50%.  If the forward rates were equal, a U.S. investor could exchange dollars for euros, invest at the 2.50% spread and hedge the currency risk, earning a risk-free extra 2.50% compared to dollar-based interest rates.  However, in the process of doing so, the forward rate on euros would be bid up to 1.0250, which eliminates any arbitrage opportunities.  A U.S investor should be indifferent to either investing in the U.S. at 2.5% or in the Eurozone at 5%, at 1.025 $/€ one-year forward exchange rate.  In a year, if nothing changes, that euro purchased at 1.025 will be at 1.00, eliminating the entire interest rate spread.

However, this doesn’t necessarily mean that hedging opportunities don’t exist.  An investor could decide to buy into longer duration fixed income abroad and roll the hedge periodically.  Using the above example, an investor could buy a foreign bond and hedge each year, selling the bond if the hedging costs become excessive.

The current spread between U.S. and German 10-year sovereigns clearly favors the U.S.  German yields are around zero and U.S. yields remain significantly higher even though U.S. yields have declined.  Thus, it would seem that German investors would have an incentive to buy longer dated Treasuries. 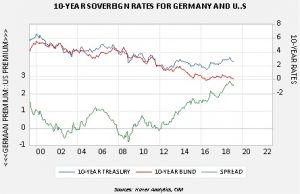 However, for a German investor to make this investment, he would have to either accept the currency risk or attempt to hedge the risk.  As shown above, the short-term rate spread determines the currency forward discount/premium relationship. 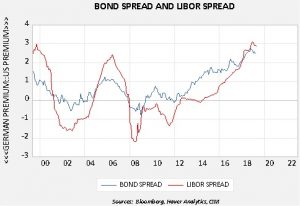 This has led foreign bond investors to (a) accept U.S. credit risk by purchasing corporate bonds and hedging the exchange rate risk, or (b) accept the currency risk by leaving the transaction unhedged.  However, that situation is less than ideal and may discourage foreign investors from investing in U.S. fixed income markets. 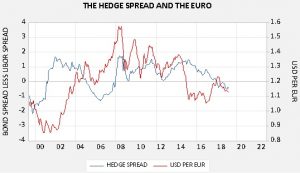 Although the hedge relationship with regard to the euro isn’t overly strong, there is a modest tendency for the currency to strengthen against the dollar when the hedge spread is negative.  Clearly, there are other factors that affect exchange rates beyond mere interest rate differences.  Although the euro has been weakening recently, it hasn’t declined significantly despite unusually wide sovereign spreads; the likely culprit is the cost of hedging.  If the U.S. yield curve were to steepen, perhaps with policy easing, the window for hedging might reopen and, paradoxically, could lead to a stronger dollar.