Gold moved steadily higher from the late summer of 2018 into last August.  Prices declined toward 1,700 into March but have been recovering since.  In this report, we will update our views on the metal.

We have been holding gold in our asset allocation portfolios since 2018, although we have diversified our commodity holdings by adding a broader commodity ETF alongside our gold position.  When we looked at gold in March, we noted that there was a divergence between the short- and long-term fundamental factors.

The long-term outlook for gold remains positive.  Our basic gold model, which uses the balance sheets of the Federal Reserve and the European Central Bank, the EUR/USD exchange rate, and real two-year T-note yields, along with the U.S. fiscal deficit relative to GDP suggest that prices are significantly undervalued and have become more so since March. 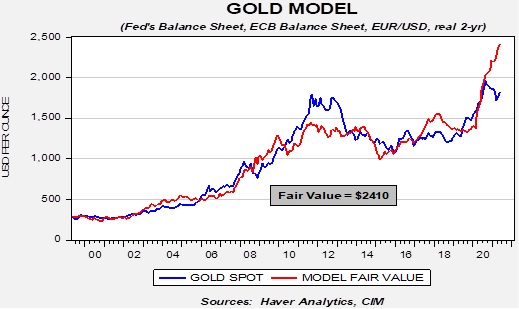 At the same time, like in March, there are several short-term factors that are less bullish than our long-term model.  One of these is longer-duration interest rates. 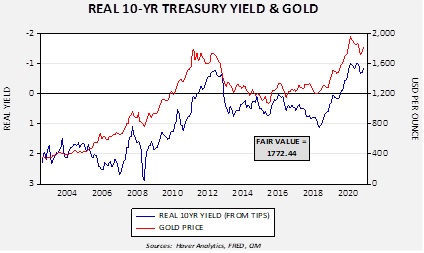 This chart shows the real 10-year yield derived from the TIPS spread against Treasuries.  The real yield is inverted on the chart scale.  Note that recently the real yield began to decline (become more negative).  Regressing the relationship generates a fair value of 1,772.44, which is $55.79 higher than our last update.  This fair value is below where gold is trading now.  In addition, we have seen gold flows into exchange-traded products merely stabilize, which is inconsistent with the recent rally in gold.

In our last update, 10-year T-note yields were rising steadily.  The rise has stopped, and yield levels have consolidated.  Our 10-year T-note yield model is projecting a fair value yield of around 1.75%.  The stall in yields has played a role in lifting gold prices.  However, the most important factor may be the recent decline in bitcoin. 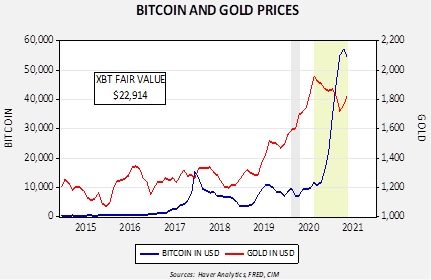 Cryptocurrencies share a similar characteristic with gold; they both provide store of value.  Although they are somewhat positively correlated since 2015 (+66%), since August 2020 (shown in light green on the chart), gold and bitcoin are inversely correlated to the tune of 89.1%.  This change of sign suggests that the two are now seen as competing products and, until recently, bitcoin was the clear winner.  The recent turnaround probably reflects regulatory concerns surrounding bitcoin.  Cryptocurrencies are often used in ransomware attacks and other criminal activity.  The high-profile Colonial Pipeline event has raised concerns about the inability of police to trace bitcoin payments.  If regulators clamp down on bitcoin, investors will likely return to gold for protection against inflation concerns.