How important have mergers, buybacks, etc. been to equity market performance?  Several analysts have attempted to answer this question by focusing on buybacks alone.  However, there is a more straightforward method of looking at this question and including all the factors that affect the number of shares available—the index divisor.

This chart shows the divisor for the S&P 500. 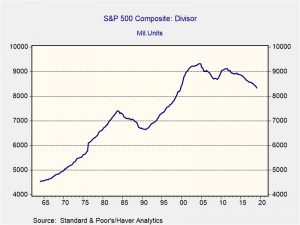 The divisor adjusts the S&P for membership changes (either by mergers or index adjustment), new share issuance or repurchases, or special stock-related transactions.  So, it isn’t a pure look at buybacks but isolating buybacks alone may overstate the impact of the activity if new shares are being issued or it may ignore the impact of membership adjustments.  In general, a rising divisor tends to depress the index and vice versa.  In the most recent data, the divisor peaked in Q3 2011; the decline in the divisor is partly due to buybacks, but merger activity has affected it as well.

To calculate the impact of the divisor, we would use the following formula:

And so, if we take the market capitalization and hold the divisor fixed at this peak in Q3 2011, we can estimate what the S&P 500 would have been without the decline in the divisor. 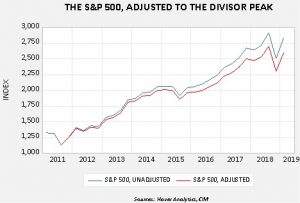 The more important question is if or when the trend in the divisor might reverse.  In general, history suggests that elevated equity market values tend to trigger equity issuance.  However, that has not been the case since 2000. 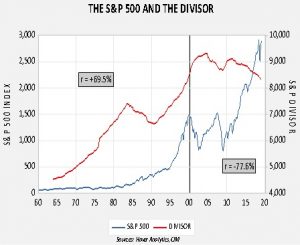 This chart shows the divisor and the S&P 500 Index since 1964.  From that year to Q1 2000, the two series were positively correlated at the 69.5% level.  However, since then, the correlation between the two series has not only flipped to inverse but strengthened.  During this century, for the most part, the equity markets appear less critical to raising capital.  Overall, we expect the divisor to continue to decline as firms continue to shrink the number of shares available; if we are correct, the equity markets have a modest tailwind going forward.