In March, job openings rose to their highest level on record. According to the Job Openings and Labor Turnover Survey (JOLTS), there were over 8.1 million job vacancies, surpassing the previous record of 7.6 million set in November 2018. The surge in vacancies is supported by data from Indeed showing that job postings in the last week of March were 15.7% above their pre-pandemic levels and were 24.2% higher in the following month.

In contrast to the JOLTS report, the most recent employment report from the Bureau of Labor Statistics showed a general slowdown in hiring. Non-farm payroll growth in April came in at a seasonally adjusted 266,000, well below the previous month’s increase of 770,000 and far short of the expected increase of 1,000,000. The gap between job openings and new hires has created angst amongst investors and policymakers alike. There are growing fears that the gap between openings and new hires may reflect flawed policy incentives, such as overly generous employment benefits or a lack of childcare. However, our research suggests that the underlying cause of the gap may be due to people weighing options outside of employment. 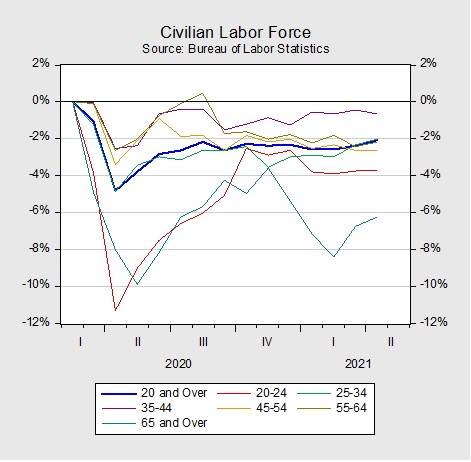 The reluctance of older and younger workers to rejoin the labor force may be due to these groups having relatively more alternatives to employment. Workers between the ages of 20 to 24 years have the option of going back to school, while the older generation has the ability to enter retirement. Data suggest there may be some truth to this claim. Although enrollment for bachelor’s degrees in 2020 dropped 2.2% from the prior year, graduate and doctoral degrees have actually increased 5.2% and 3.6%, respectively. Moreover, during the height of the pandemic, there was a surge in the number of people 65 years and older who applied for Social Security benefits. Although this trend has cooled in recent months, the number of baby boomers retiring more than doubled from 1.5 million in 2019 to 3.2 million in 2020.

An increase in labor’s negotiating power may have also contributed to people weighing their options before returning to the labor force. Eager to hit the ground running as the economy begins to reopen, firms have begun reducing their educational requirements for certain positions in order to attract more applicants. As a result, there has been a surge in job postings requiring less than a bachelor’s degree. Additionally, the recent pay increases at major companies such as Amazon (AMZN, $3,174.74), Walmart (WMT, $137.92), and Target (TGT, $209.29) may have encouraged workers to hold out for higher-paying jobs. According to research from Tracktherecovery.org, high-wage and medium-wage employment have either surpassed or are approaching pre-pandemic levels, while low-wage employment is down nearly 30%. This suggests that low-wage earners may want to bide their time before returning to the labor force.

Adverse incentives may be another contributing factor to the labor shortage. The lack of childcare may have made it difficult for single and married workers with children to search for new work, while single people with no children may find the generous unemployment benefits a more attractive option than taking an actual job. This may explain why the labor force for married people with no children has almost returned to pre-pandemic levels. If we are correct, the decision by some states to remove the pandemic booster to unemployment benefits could lift employment. Nevertheless, it may not stop the youngest and oldest cohorts from considering going back to school or entering retirement.

In short, getting back to work may be an attractive option to those who have limited alternatives to employment, have high earning power, or aren’t burdened by childcare costs. For others, the decision to return to the labor market may be more complicated. The prospect of early retirement or continuing one’s education could be more attractive than accepting a job offer. The decision is further complicated by some competing firms offering higher wages. Finally, the lack of childcare and generous unemployment benefits could also be complicating factors. However, all things considered, the labor force shortage will likely work itself out over time. Although older workers may enter or remain in retirement, the younger workers will likely come back to the labor force with more skills. In the meantime, we expect that the labor force shortage could have a mixed yet mild impact on the economy. The longer people stay out of the workforce, the more they must rely on savings to fund day-to-day activities, which cannot be maintained forever.