In practice, the macro data used to calculate fair value for exchange rate models is usually not granular enough to capture differences between nations.  For example, with purchasing power parity, all goods and services in an inflation index are not tradeable and so these non-traded products cannot be adjusted via exchange rates.  And so, all the models tend to be useful only at extremes.  In other words, wide deviations from calculated fair value can offer useful signals, but, like all valuation models in finance, they are not helpful for timing.[1]  At the same time, long-term investors can find value in such models in that they do signal when a relationship is cheap or rich.  This is helpful but only if (a) the investor is truly patient, and (b) something significant hasn’t changed.

Our favorite model is purchasing power parity because long-term inflation histories are usually easy to access and, theoretically, inflation is a very important variable.  As we have been noting for some time, the dollar is expensive based on these models.  For example: 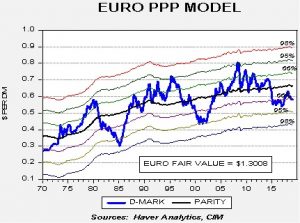 This is a parity model for the EUR, using German inflation against U.S. inflation.  The fair value exchange rate is $1.3008 compared to the current rate of $1.1200.  This deviation from fair value, which in historical ranges is where reversals usually occur, has led to the belief that, at some point, the dollar will weaken.  The model also suggests that once a reversal occurs it is common that the exchange relationship will overshoot.  Thus, a turn in the exchange rate is an important event; in markets, for U.S. investors, foreign stocks and commodities are two areas where one can historically find outperformance.

But, the Trump administration has moved to the use of tariffs to combat persistent trade deficits.  The use of tariffs had fallen out of favor, in part because the U.S. fostered open trade, and because tariffs tend to be less effective under flexible exchange rates.  Why?  Because the nation targeted by tariffs can simply allow its currency to weaken, offsetting the price effect of the tariff.  For example, if China is a target for tariffs, the expected response would be CNY depreciation.

This chart shows how tariffs have become less of a factor. 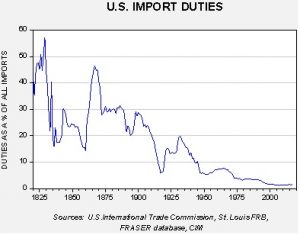 As the chart shows, after the 1920s, the U.S. has steadily abandoned tariffs…until now.

If the administration continues down this path of using tariffs on a widespread basis, our position on future dollar weakness has to be reconsidered.   Although the tariff policy may not last once Trump leaves office, one cannot necessarily assume that to be the case.  Of course, the U.S. could act against depreciation too, but that might prove difficult to stop.

At some point, we expect the administration (or some future administration) to realize that tariffs are a poor tool for reducing the trade deficit.  Currency weakness is more effective but the most effective method is capital controls.  The reason the U.S. runs persistent trade deficits is because the dollar is the reserve currency.  If the U.S. denied access to the U.S. capital markets, then foreigners would have less reason to engage in policies to promote exports.  Would there be collateral damage from such policies?  Yes, but we may be approaching a point where Americans are willing to accept those side effects in order to reduce inequality and lift domestic wages.

[1] Or, said another way, “markets can stay stupid longer than you can stay solvent.”