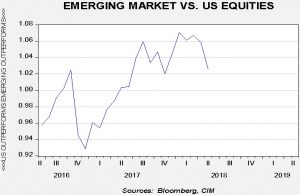 The chart above shows the relative performance of emerging market equities against U.S. equities.  A rising line indicates that foreign equities are outperforming.  Questions are being raised as to whether this recent decline is the end of what has been a strong relative uptrend in emerging equities that began near the end of 2016. 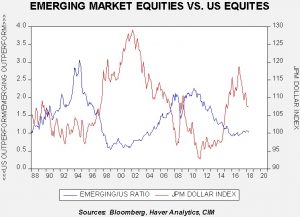 The above chart shows the same relative performance ratio along with the JPM dollar index.  In general, emerging equities tend to trade opposite the dollar.  In the past few weeks, the dollar has rallied after peaking in early 2017.  We suspect this has mostly been a short-covering rally (surveys suggest market participants have been leaning heavily against the greenback), although there has been concern that interest rate differentials may be supporting the dollar as well.

Our basic valuation model for exchange rates is purchasing power parity, which assumes that exchange rates offset price differences between countries.  In general, nations with higher inflation tend to have weaker exchange rates to equalize prices.  The model is not perfect; not all goods are tradeable and trade regulations can interfere with the ability of floating exchange rates to generate “the law of one price.”  However, the historical record does suggest that when exchange rates deviate significantly from the fair value generated by the parity calculation, it is more probable that the trend will reverse over time.  Currently the major exchange rates are running below parity. 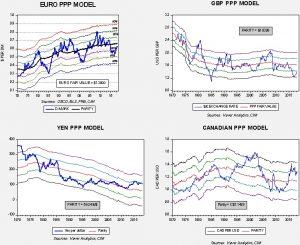 These four charts show the parity models for the D-mark (a proxy for the euro), the British pound, Japanese yen and Canadian dollar.  All are, or have recently, been a standard error or more from fair value.  This would suggest the dollar has more room to decline.

In conclusion, the recent rally in the dollar and pullback in emerging markets does bear watching, but the underlying fundamentals still support the emerging market allocation.  Thus, without ample evidence to suggest otherwise, we expect emerging market equities to recover from recent weakness.