However, if NAIRU is natural, it doesn’t appear to be stable. 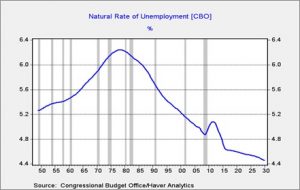 This chart shows the natural rate of unemployment, calculated by the Congressional Budget Office.  As is evident, it has increased and declined over time.

The lack of inflation given the low level of unemployment has led the FOMC to consider if another model might work better.  If the reaction of the economy to low unemployment has changed, then policymakers may need to keep rates lower for longer to avoid the risk of raising rates too soon or too much.  Doing either could needlessly shorten a business cycle.  If inflation reacts more slowly to falling capacity, it might make sense to use a different way to adjust the policy rate to inflation.  Currently, the FOMC uses a 2% target on core PCE inflation.  In other words, based on the yearly change in the core PCE index, the FOMC attempts to keep inflation around a yearly 2% change.  Although the Fed attempts to suggest 2% isn’t a ceiling, it is generally treated as one by the financial markets.

Of the current 17 members of the FOMC, nine are Ph.D. economists.  Of that group, five have advocated for a reexamination of inflation policy.  None of the non-Ph.D. members have advocated for a change.  Thus, the drive to make a change appears to be coming from the “technical” side of the shop.  At present, there are three ideas being explored to address the inflation policy issue.

All three options have pluses and minuses.  Raising the inflation target is the easiest to understand.  But, there is concern that if the target appears flexible then inflation expectations could become unanchored.  The risk is that once the target is changed, the Fed could find itself facing political pressure to keep rates steady or cut them even with rising inflation to suit short-term political goals.  Moving average models will reduce the likelihood that the Fed would react quickly to inflation impulses and make the policy rate steadier.  However, by design, moving averages will tend to delay easing and tightening.  In the present circumstance, it appears attractive but it will tend to slow rate reductions going into an easing cycle.  Targeting the level of price is attractive in that it takes previous price levels into account, but it will be hard to explain to the public how it works and what to expect.  And, the calculated trend can be sensitive to initial conditions.  In other words, if you start your model in a high inflation period, it can affect the deviation from trend.

Here is one potential view of the second option.

Using the Mankiw Rule (which uses core CPI instead of core PCE), we take a five-year average of inflation on the model shown on the right.  The model on the right has better performance; during the 1990s, it did a better job of informing policymakers that rate changes were unnecessary and would have told the Bernanke Fed that policy was too tight going into the 2007-09 recession.  Interestingly enough, both versions suggest the Fed is currently too easy.

Here is another view using the employment/population ratio as a proxy for capacity.

The moving average model gave clearer signals; it would have told policymakers to ease sooner in 2001 (a recession year) and would have signaled to the Bernanke Fed to begin easing sooner than it did before the 2007-09 recession.  Both suggest the neutral rate is below the current rate but the moving average model suggests policy is tighter than the unadjusted inflation model.  Essentially, these views show that the real issue remains the measure of slack, but adjusting the inflation indicator might mitigate the uncertainty surrounding the capacity issue.

Here is one potential view of the third option.

The chart on the left shows the core PCE index, log transformed, regressed against a time trend.  In general, price levels vary to trend.  The chart on the right compares the detrended index to the fed funds target.  Note that the cycles in policy tended to move with price levels except for the current one.  This model would have kept the FOMC from tightening at all in this cycle.

Under current conditions, this reassessment of inflation policy will likely lead to an end of tightening.  Essentially, the considered adjustments will probably discourage further rate hikes by reducing the policy level of inflation.  However, this assessment still depends on the proper measure of slack in the economy, which, so far, has not been resolved by the FOMC.  Nevertheless, we think the proper assessment of this change is dovish for policy.

[3] The Bank of England has a sort of smoothing process where it targets a 2% rate with a 1% variance.  If inflation rises or falls outside this band, the bank must explain to the Exchequer why this occurred and what it will do about it.  Thus, if the variance is due to a one-off situation, the bank may do nothing.