In the turmoil caused by COVID-19, fixed income has performed remarkably well.  Ten-year T-note yields have declined to record lows and, as we will show below, there is no evidence of severe stress in the credit markets.

First, here is what we are seeing in Treasuries. 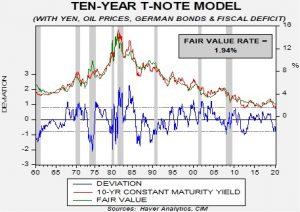 This chart shows our 10-year T-note model.  It uses fed funds, the 15-year average of inflation,[1] the yen/dollar exchange rate, oil prices, German bund yields and fiscal deficits as a percentage of GDP.  At the end of last year, the fair value was around 2.40%; as the above chart shows, it has declined sharply to 1.94%.  Of course, that yield remains well above current yields.  The implied three-month LIBOR rate from the two-year deferred Eurodollar futures suggests the financial markets expect another 50 bps of rate cuts over the next two years.  Even assuming a 0.75% fed funds target only lowers the fair value to 1.84%.  Assuming those rate cuts at a German bund yield of -3.60% (a decline of 300 bps from current levels) would get the model to current yields.  A negative yield to that level would be unprecedented.  The most likely justification for current yields would be a sharp drop in inflation expectations.  If inflation expectations decline to 1% per year along with the assumption of 100 bps of rate cuts, that would justify current yields.  This analysis suggests that long-duration Treasuries are richly valued at current levels, and if our base case that COVID-19 won’t trigger a recession is accurate, then a back-up in these yields would be expected.

What is perhaps most interesting is that there has not been a strong reaction in credit.  Comparing the 10-year to Baa yields shows that spreads have not moved significantly, only around 30 bps. 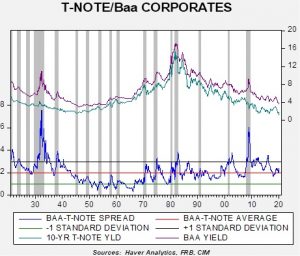 In high yield, spreads have widened as well, but the increase is not notable so far. 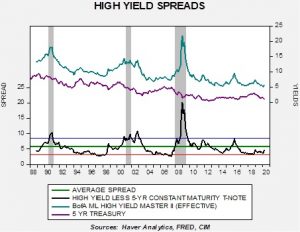 Yields have increased by 80 bps but remain 120 bps below average.

The lack of pressure in the credit markets, at least to this point, suggests the current situation probably won’t evolve into deep financial crisis or a recession.  We will continue to monitor the credit markets closely in the coming weeks, but financial stress appears quite manageable for now.

[1] Which is a proxy for inflation expectations.