In our 2021 Outlook, we had a forecast for the S&P 500 of 3918/4050.  Since the index is close to that level, we have received questions about whether we are expecting little upside from here or if we intend to calibrate our expectations.  This week’s Asset Allocation Weekly is a preliminary look at what we intend as an update of our forecast.

Optimism surrounding economic growth in 2021 is rising rapidly.  A number of private economists have dramatically upgraded their forecasts.  The Atlanta FRB’s GDPNow forecast for Q1 is estimating real GDP at 9.5%.  We do expect that growth estimate to decline from these levels (e.g., rising consumption will lift imports, which are a drag on GDP), but a reading above 5% is clearly possible.  There are two factors driving optimism; the first is that the virus appears to be coming under control.  The combination of widespread infections and increasing vaccinations means the U.S. is probably achieving some degree of herd immunity.  Although caution won’t be necessarily thrown to the winds, a steady relaxation of restrictions will boost services consumption.  Second, fiscal spending will tend to boost the economy.

This optimism could be misplaced.  The virus could mutate into a form that renders current vaccines less effective.  Even after the risk of infection has been reduced, it still may take some time for fear to be reduced.  It should also be noted that much of the fiscal spending is direct transfers to households instead of the government purchasing goods and services.  Although this aid may be spent, we would not be shocked to see some of these funds used for debt reduction or saving.  After all, inflation has been low, households are still over leveraged, and many households are in arrears over rent or mortgage payments.  It isn’t certain that this optimism is appropriate, but for now, the financial markets are leaning in that direction.  So, what do we know so far?

We are seeing a drift away from sectors that benefited from the pandemic to those who will do better in recovery.  The easiest way to see this is by comparing the S&P 500 to its equal-weighted compatriot. 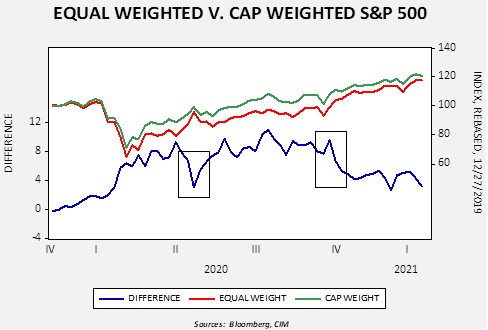 Commodity prices are rising.  The five-year change in the CRB index is rising rapidly. 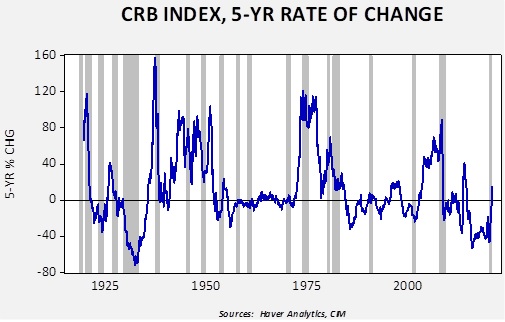 The yield curve is steepening. 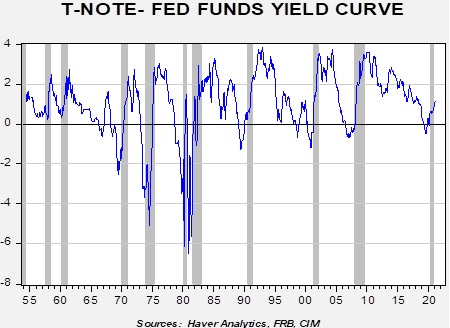 This chart shows the spread between the 10-year T-note and fed funds.  Inversions (a reading less than zero) is a consistent indicator of recession.  As this curve steepens, note that in the last four business cycles, the spread exceeded 200 bps.  If this were to occur again, the 10-year T-note yield would exceed 2.00%.

So, what does this all mean?  First, we might be in a situation where the S&P 500 doesn’t move much higher from here but sectors and areas of the market that have lagged show improvement.  Investing performance may be less about owning an index than focusing on other areas of the market.  Second, areas outside of stocks are poised to do well―commodities, for example.  Third, the risk to equities probably comes from rising interest rates.  At the same time, not all parts of the equity market struggle with higher rates, and these areas should show promise.