Since the election of President Trump, a number of sentiment indicators have risen strongly.  There is concern that the improving sentiment isn’t warranted.  In this week’s report, our research supports the conclusion that improving sentiment is better described as a reflection of the overall state of the economy.  In other words, our analysis suggests that the improvement in sentiment is actually more in line with the economy and the earlier pessimism was probably excessive.

The chart on the left shows the National Federation of Independent Business (NFIB) Optimism Index and the one on the right is the Philadelphia FRB Business Conditions Index (BCI).  Both have jumped since the November elections.  Consumer confidence has improved as well. 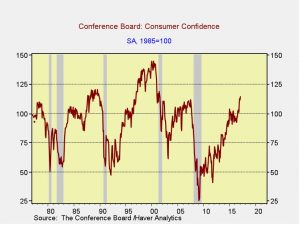 To compare how the business sentiment indicators have reacted to the actual data, we compared the aforementioned NFIB and BCI indices to the Chicago FRB’s National Activity Index (CFNAI).  The latter index is a broad-based measure of the economy that captures both business and household activity.  To reduce the volatility in all these measures, we have smoothed them with a six-month moving average.

These two charts show the results of regressions where the CFNAI is the dependent variable and either the NFIB or the BCI is the independent variable.  When the model suggests that sentiment is too pessimistic relative to the economy, the deviation line is above zero.  The recent jump in the NFIB (on a smoothed basis) suggests that small business sentiment is just now reflecting the overall economy.  That could mean that if sentiment remains elevated either the model will turn optimistic or, perhaps, the economy will improve.  The Philadelphia FRB BCI has just turned modestly optimistic but remains in the normal range of deviation values.  Thus, the improvement in sentiment is notable but appears to be more of a reversion to the actual performance of the economy.  Interestingly enough, both models indicate that the impact of sentiment on the economy is coincident, meaning sentiment doesn’t necessarily lead to better economic performance.  At the same time, the models also suggest that the improvement in sentiment doesn’t signal conditions of excessive optimism, either.  This means that the rise in sentiment isn’t necessarily creating conditions of disappointment which might adversely affect equity markets.