After peaking at 2872.87 on January 26, the S&P 500 has been in a corrective phase.  The index fell just over 10% and has been range bound ever since, well below the aforementioned high.  Here are the primary reasons equities have struggled:

All these worries have some basis in fact.  However, we believe the bearish case is overstated based on what we know now. 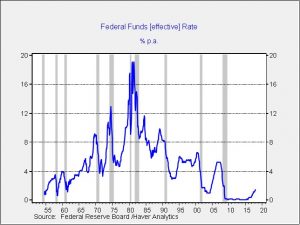 In many cases, especially prior to the 1981-82 recession, the onset of recession coincided with the peak in fed funds.  However, in the three recessions since 1982, the peak in rates has preceded the recession by an average of 14 months.  If the same pattern holds, we are probably at least 12 to 18 months away from the next recession[1] as policy tightening will likely continue into next year.

In conclusion, although the aforementioned concerns are legitimate, we think they are probably overdone, at least in the short run.  In addition, there appears to be ample liquidity to fuel higher equity prices. 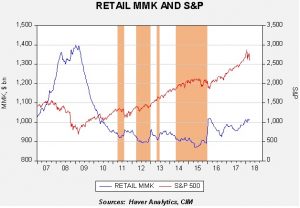 This chart shows the level of retail money market fund holdings along with the S&P 500 Index.  The shaded areas show periods when money market funds are at levels of $920 bn or less.  These periods tend to coincide with sluggish equity performance.  Current fund levels exceed $1.0 trillion; unless investors now view returns on cash as adequate enough to consider it an asset class, we suspect the high levels of liquidity are an indication of caution.  If a degree of calm returns to the market environment, it appears there is enough liquidity to at least challenge the previous highs in equities.

[1] Assuming a geopolitical event isn’t responsible for the next downturn.