In this week’s report, we want to examine the current neutral policy rates that are generated by our variations of the Mankiw Rule.  The Mankiw Rule attempts to determine the neutral rate for fed funds, which is a rate that is neither accommodative nor stimulative.  The Mankiw Rule is a variation of the Taylor Rule.  The latter measures the neutral rate using core CPI and the difference between GDP and potential GDP, which is an estimate of slack in the economy.  Potential GDP cannot be directly observed, only estimated.  To overcome this problem with potential GDP, Mankiw used the unemployment rate as a proxy for economic slack.  We have created four versions of the rule, one that follows the original construction by using the unemployment rate as a measure of slack, a second that uses the employment/population ratio, a third using involuntary part-time workers as a percentage of the total labor force and a fourth using yearly wage growth for non-supervisory workers. 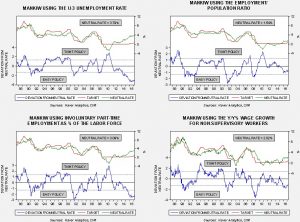 The charts above show our four variations of the Mankiw Rule.  We have published the neutral rates for each model on each chart.  Two of the variations, using the unemployment rate and involuntary part-time employment, are well outside the lower standard error line, suggesting easy policy.  However, the variations using the employment/population ratio and wage growth for non-supervisory workers is at or within one standard error, which indicates that policy is closer to neutral.

Overall, this means the FOMC, while raising rates, still has a mostly dovish bent.  By choosing the most dovish variation of the Mankiw Rule, we are likely closer to the end of this rate cycle, assuming that core CPI remains mostly steady and the employment/population ratio doesn’t unexpectedly rise.  Such a stance is bullish for equities; however, it may be bearish for the dollar which may bring some adjustments to our current asset allocation mix.