Our baseline position has been that the COVID-19 virus would have a significant impact in terms of magnitude but be of limited duration and thus would probably not put the economy into recession.  Over the past week, two events have occurred which put this position into question.  The first is the oil market collapse triggered by a market share war between Russia and Saudi Arabia.[1]  The second issue is that the financial system is exhibiting symptoms of liquidity problems.

We have noted a sudden decline in financial conditions as measured by the Bloomberg Financial Conditions Index for the U.S. 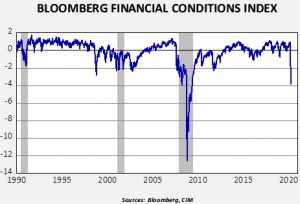 Our data uses the Friday closes for the index.  The index is composed of eight variables[2] which are standardized and totaled.  The more negative the reading, the greater the level of financial stress.  The index was positive until the last week of February.  The current level of stress is about on par with March 2008 during the collapse of Bear Stearns.

This data suggests a serious level of financial problems in the financial system.  We have noted difficulties in the funding markets since September.  Although the Fed has consistently claimed there was nothing systemic in the rise of repo rates, the persistence of the funding shortages despite the expansion of the Fed’s balance sheet by $400 billion argues otherwise.

What is the nature of the financial stress?  Its roots most likely lay with interest rates being too low for too long; investors had to extend their portfolio risk to find attractive yields.  The financial services industry took steps to provide financial products with more attractive yields.  Some of this product creation went to the non-bank financing system which funds itself in the repo markets.  If repo markets are disrupted, they can no longer service the debt they used to own the higher yielding assets and liquidations occur.  If no liquid market exists for these products, the owners may be forced to sell other assets (gold, Treasuries, equities, investment grade bonds) to find necessary liquidity.  Recent weakness in “risk off” assets would tend to confirm rising levels of financial stress.  A contributing factor is the plunge in oil prices, which raises default risk among energy companies.

The Federal Reserve should be able to corral this problem if it moves aggressively enough to force liquidity into the financial system.  Unfortunately, as we saw in 2008, it may be difficult to pinpoint exactly where the funding problems lie.  But, the key lesson from 2008 is that enforcing moral hazard is a bad idea; we doubt such a policy will be executed in this event.  Although a few of our economic indicators have moved to signal recession, the preponderance have not.  On the other hand, the yield curve did invert last year, and we have been on “recession watch” for some time.[3]

How does all this affect equity markets?  The chart below can offer some guidance.  This chart shows the weekly close of the S&P 500 going back to late 1927.  We log-transform the index and regress a time trend through the data.  The parallel lines represent various standard error levels from trend; the gray bars show recessions.  It is obvious that, with the exception of 1945, every recession has led to some degree of stock market weakness. 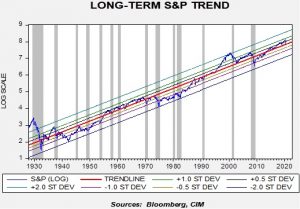 To compare recessions, we measured the high reached before the recession to the low in the index during the downturn in terms of movements in standard errors.  Here is a table of the events.

Range represents the change in standard error from high to low.  So, the Great Depression saw the market fall nearly six standard errors, a true “six-sigma” event.  The current decline is consistent with a normal recession, so if policymakers can secure the financial system and absorb the quarantine effect of COVID-19, then equity markets should stabilize soon.  A deep recession (but not including the Great Depression) would put the S&P 500 around 1640, a much more profound decline.

The postwar experience doesn’t support two consecutive deep recessions, which is why we have argued that another 2008 is unlikely.  Of course, we did have consecutive deep recessions in the 1930s: the 1936-37 recession was caused by profoundly inept policy when the Roosevelt administration tightened fiscal policy while the Federal Reserve raised rates.  The odds of a similar event occurring in the current situation is improbable; both fiscal and monetary policy are accommodative and will almost certainly become more so.  About the only way we have a deep recession is if the policy response is strikingly underwhelming.  Although possible, that is a low probability outcome.

So, the bottom line is that we will likely see a few weeks of churning and perhaps a decline toward 2300, but the worst of this downturn is probably over.  Liquidity injections and the natural waning of COVID-19 should improve sentiment over time.  We are probably very close to the low in terms of price but not in terms of time.  It will probably take a few weeks of basing before a durable recovery can develop.

[1] We discussed this issue in our most recent Weekly Energy Update.