Our cyclical position on foreign investing remains with a zero allocation; although the committee has not been negative on foreign, our work suggested that the risk/reward compared to small and mid-cap stocks warranted putting more assets in those areas.  However, we are continuing to pay close attention to foreign as an area that may be attractive in the future.

In the past, we have noted that relative performance between foreign developed and U.S. equities is sensitive to the dollar.  In general, during periods of dollar strength, U.S. equities tend to outperform (assuming both are denominated in dollars, which is the case for a U.S. investor). 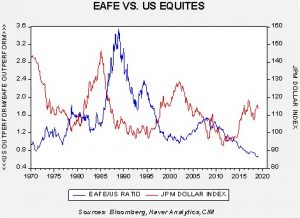 The blue line on the chart shows the ratio of performance between EAFE and the U.S., rebased to 1970.  When this line is rising, foreign stocks are outperforming.  The red line shows the JPM Dollar Index.  Note that a rising dollar tends to favor U.S. outperformance, while dollar weakness helps foreign market performance.   Although the dollar has remained strong, both on a purchasing power parity basis and a cycle basis, the dollar is extended and should begin to depreciate later this year.

However, in this business cycle, U.S. stocks have generally outperformed even during periods of dollar weakness.  This has led us to look for other factors that might account for this discrepancy.  It appears that the growth/value variation explains at least part of this divergence. 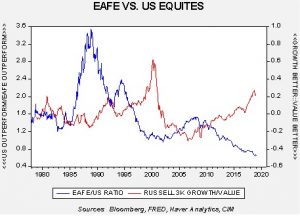 As in the first chart, the blue line shows the relative equity performance.  The red line shows the Russell 3000 Growth/Value divergence; a rising line suggests growth outperformance.  Growth stocks have outperformed in this bull market but are showing signs they may finally be starting to give way to value.  The primary driver of growth/value is the P/E ratio.  Significant multiple expansion isn’t all that likely, although a return to the 18x+ area would not be surprising.

Why would the growth/value divergence affect foreign stocks?  The most likely reason is index construction.  U.S. indices will tend to have a greater weighting toward technology due to the size of that industry in the U.S. economy.  Foreign nations, for the most part, have less dominant tech industries.  With technology being considered a growth sector, a period of strong technology performance would tend to lead to outperformance by growth.  If foreign equity indices have less technology, they would likely underperform.  Consequently, when the growth/value balance shifts to the latter, we would anticipate foreign outperformance.  The table below provides a comparison of sector exposures. 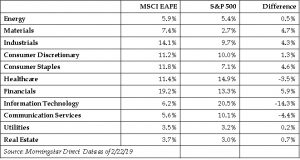 Overall, we continue to monitor the relative performance of foreign compared to other asset classes.  If our risk/reward estimates change later this year, we could consider a return to international.