We have been monitoring the S&P 500 performance relative to new GOP administrations.  Based on the historical pattern, the market has reached the average peak level a few weeks early. 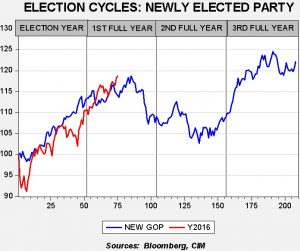 This chart shows the performance of the S&P 500 on a weekly close basis, indexed to the first Friday of the first trading week in the year of the election.  We have averaged the first four years of a new GOP president.  So far, this cycle’s equity market has generally, though not perfectly, followed the average.  Based on that pattern, the current level of the market is around the usual peak.  Clearly, this election cycle could be different, but the average does suggest we could be poised for a period of weakness.

So, what might cause a pullback?  Here are a few candidates:

A debt ceiling crisis: The Treasury indicates that the government may begin to shut down as early as August if the debt ceiling isn’t lifted.  With the GOP controlling Congress and the White House, raising the debt limit should be perfunctory.  However, there are rumblings that the Freedom Caucus will demand spending cuts to agree to any debt limit increases.  The Democrats, after watching President Obama deal with two government shutdowns and the sequester over the debt limit, are in no mood to work with the administration and may force the congressional leadership to deal with the Freedom Caucus.  If another debt limit crisis triggers a new government shutdown and raises fears of a potential downgrade of Treasury debt, a pullback in equities would likely result.

Winds of war on the Korean Peninsula: The U.S. will have three carrier groups in the East China Sea in the coming weeks.  Although we doubt the Trump administration wants a war with North Korea, the U.S. is putting enough assets in the region to go to war if it so decides.  A full-scale attack on North Korea would be a bloody affair; the Hermit Kingdom has been preparing for such an attack for years and even if its nuclear program isn’t ready to deliver a weapon, its conventional forces will wreak havoc on the South.  Even a hint of a conflict will likely prompt a pullback in risk assets.

Monetary policy worries: The FOMC appears driven to raise the fed funds target rate.  As we have noted before, there is a good deal of uncertainty surrounding the degree of slack that remains in the economy.  The FOMC appears to be leaning toward the notion that the economy is getting close to capacity and further declines in unemployment will surely lead to inflation rising over target.  Although financial markets didn’t react well to the rate hike in December 2015, the subsequent increases have occurred without incident.  Telegraphing the increases has reduced the risk to rate hikes but the odds of overtightening will increase if the Federal Reserve has miscalculated the level of slack in the economy.  This potential concern, coupled with plans to begin reducing the size of the balance sheet later this year, could begin to undermine market sentiment.

We want to note that the average decline shown on the above graph is not a numerical forecast; we tend to view the direction as a more important indicator than level.  It suggests that a period of equity market weakness is a growing possibility later this summer.  What we don’t see, at least so far, is evidence of anything more than a pullback.  Recessions tend to be the primary factors that lead to bear markets.  The economy is doing just fine; the yield curve hasn’t inverted, the ISM manufacturing index is comfortably above 50 and there hasn’t been any evidence in the labor markets to suggest a drop in economic growth.  Thus, we may see a weak summer for stocks but nothing that would lead us to take a defensive position in the equity markets.  Instead, a pullback will likely create an opportunity for investors.