This week, we examine commodities in our fourth installment on secular trends. 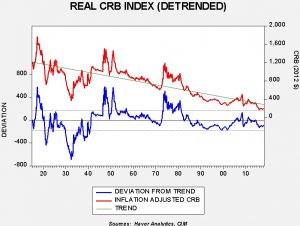 Commodity prices challenge the notion of “secular.”  This chart shows a trend model for real (inflation-adjusted) commodity prices, represented by the Commodity Research Bureau (CRB) commodity index, deflated by CPI.  We prefer this commodity index for its long history (over 103 years) and the fact that it’s a balanced index, giving relatively equal weights to each major group.  As the chart shows, on a really long-term basis, commodity prices tend to decline relative to inflation.  This is one of the triumphs of capitalism; firms operating under markets have an incentive to constantly produce and use raw materials more efficiently.  This includes commodity producers themselves, who are always trying to improve their productivity.  So, over time, farmers, miners, drillers and ranchers are working to get more output with less input.  And, on the demand side, firms are constantly trying to use less raw materials in production.  And so, over time, commodity prices tend to lag overall consumer prices.

The lower line on the chart de-trends the data and it’s worth noting that there have been four occasions when commodity prices were well above trend.  These coincide with war or periods of great financial distress.  Thus, we see a spike during WWI, WWII, Korea and the 1970s.  The first three events saw commodity prices jump due to the increase in wartime demand and supply interruptions.  War not only increases demand for wartime production, but it is not uncommon in mass mobilization war for combatants to try to deny their enemies key commodities.  Part of the reason Imperial Japan bombed Pearl Harbor was due to a U.S. oil embargo.  Japan decided to invade the Dutch East Indies but needed to eliminate the U.S. Navy as a threat to these plans.  Attacking supply chains leads to hoarding of key commodities and higher prices.

The 1970s bull market was more due to a currency crisis.  The decision by President Nixon to close the gold window and the subsequent drop in the dollar’s exchange rate led to a rapid increase in inflation expectations.  These expectations were bolstered by a regulatory regime better suited for a Bretton Woods world.  Oil prices spiked due to the Arab Oil Embargo; regulations on pricing and job protection allowed firms to rapidly pass cost increases on to the final product.  Rising inflation led investors to search for inflation hedges and commodities were a popular option.  This commodity bull market collapsed in the face of Paul Volcker’s rapid increase in interest rates, which boosted the dollar and began the process of dampening inflation expectations.

We did see a minor bull market in commodities from 2002 into 2007 that was almost completely caused by Chinese demand.  China was growing at a rapid clip and the impact was significant given the size of its economy.  However, compared to previous bull markets, the price increases were rather constrained.  The lack of mass mobilization war and expectations that deregulation and globalization would remain in place in the developed world, along with central bank policies that targeted manageable inflation, kept commodity prices mostly under control.  Chinese demand did buoy commodity prices after the 2008 Financial Crisis but only kept commodity prices on trend.  As China attempts to restructure, commodity prices have come under further pressure.

As long as deregulation, globalization and central bank independence remain in place, it’s hard to make a case for a major inflation event.  However, the political consensus that has supported these societal trends is now coming under attack.  Rising populism in the West, which opposes globalization and is beginning to push back against the unfettered introduction of new technology, could weaken the disinflationary consensus that has dominated Western policy since the late 1970s.  If trade impediments are implemented and job-eliminating automation is curtailed then the central banks are the only bulwark against rising inflation.  And, as a matter of course, central banks are independent only with the consent of legislatures.  Under populist regimes, it isn’t hard to imagine central banks being forced to support growth and tolerate higher inflation.

Although indicators suggest we are early in the process of reflation, populist governments are popping up in Europe, Brexit has occurred and populist parties are gaining strength even in nations where the establishment holds the government.  President Trump is clearly populist and is in the process of disrupting the global trading system.  Technology firms are becoming pariahs.  All these factors suggest that the Reagan/Thatcher policies that brought inflation under control are under threat.  As these trends play out, commodities should become increasingly attractive to investors.   The Asset Allocation Committee continues to monitor these trends.