(Due to staff vacation schedules, there will not be an accompanying podcast and chart book this week. The multimedia offerings associated with this report will resume next week, June 11.)

Over the past five years, the United Kingdom has been the backwater of investment attraction.  Much of the investor indifference originally stemmed from Brexit and the ensuing drama that unfolded.  Recent issues associated with COVID-19, particularly the error-plagued early responses, have depressed asset flows further.  As evidence, among developed countries, the United Kingdom registered the lowest five-year annualized return through the end of last year.  Investor indifference has led to attractive fundamentals for British companies relative to those in the rest of the world, particularly versus U.S. counterparts.  The operative question, therefore, is whether the U.K. will continue to be an investment pariah, or will the conclusion of the Brexit saga soothe investor concerns?

The first issue is obviously the current status of Brexit.  While we have written on issues faced by the United Kingdom as an outgrowth of Brexit, we note that these will be borne out over an extended period of time.  The recent approval of the EU-U.K. Trade and Cooperation Agreement (TCA) by the European Parliament, while still requiring further details between the two sides, sets an essential framework for business practices.  Though the TCA doesn’t place Brexit fully in the rearview mirror, the ring fence is now narrower than at any point since the vote in June 2016.

Combined with the resolution of trade, U.K consumer demand is expected to bounce back in the second quarter.  Such demand expectations have driven the IMF to upgrade its growth forecast for the U.K. to 5.3% this year and 5.1% in 2022.  Adding credence to the argument for strong growth is progress registered against COVID-19.  Although Britain blundered in its early response to COVID-19, as noted previously, recent data are much more optimistic for the British populace. 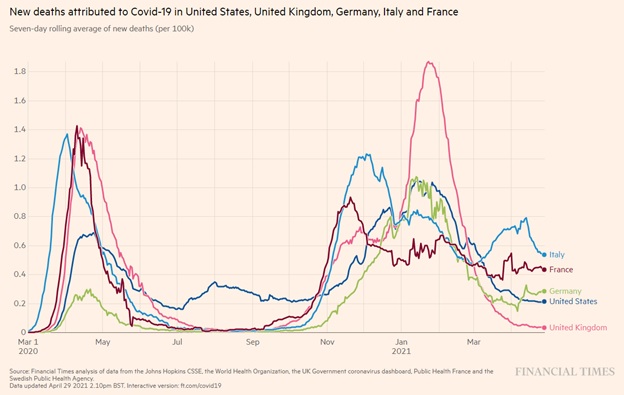 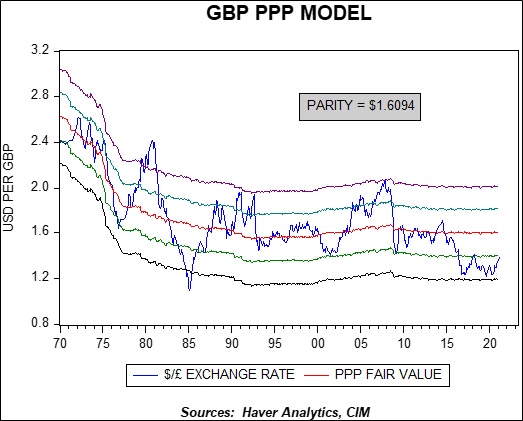 Although there is uncertainty surrounding the long-term fallout from Brexit, the prospects for the U.K. over the next few years appear favorable and valuations among the unloved U.K. equities are certainly less stretched than their U.S. counterparts.  While we find U.K. large cap stocks to hold appeal for more moderate risk thresholds, U.K. small cap stocks hold even more appeal for aggressive investors on a range of valuation measures relative to small cap U.S. equities.  Since small cap companies are often less integrated into the global economy, they should be less adversely affected by a strengthening pound.