The prolonged weakness seen in capital spending is a concern for the economy and equity markets. 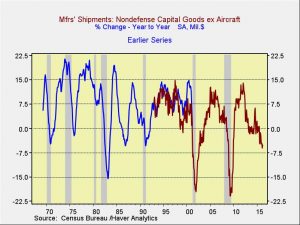 Taking this data from 1992 and regressing it against the S&P 500 suggests an overvalued equity market. 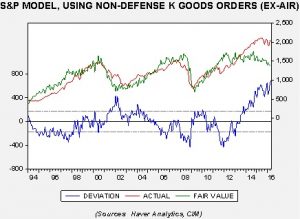 This chart shows the results of regressing non-defense capital goods orders, excluding aircraft, against the S&P 500.  The orders data closely fit this equity index until around 2012.  Based on this study, fair value is around 1383.

So, what is causing this divergence?  We suspect monetary policy, the dollar and corporate behavior are affecting the equity market.  Adding a proxy for buybacks and monetary policy, along with the yen’s exchange rate, reduces the degree of overvaluation. 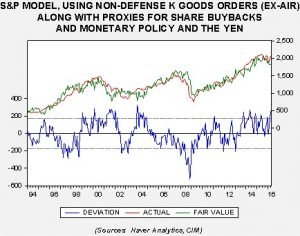 Adding these proxies increases fair value to 1811, significantly reducing the degree of overvaluation.  This is still well below the current market, but it does show how equity markets have become dependent on accommodative monetary policy, dollar strength and share buybacks.  Without stronger corporate economic growth—which will boost the demand for investment goods—monetary policy tightening, regulation to reduce buybacks or a stronger yen could put pressure on equity markets.  We remain supportive of equity markets, although we are only looking for single-digit gains, at best, due to current valuation levels.