Gold prices have been strong recently, supported by perceptions of easing monetary policy and oblique statements from the White House hinting at supporting a weaker dollar.  Lower interest rates and dollar weakness are generally bullish for gold prices.

Our coincident gold price model suggests the recent rally is merely “catching up” from an undervalued condition. 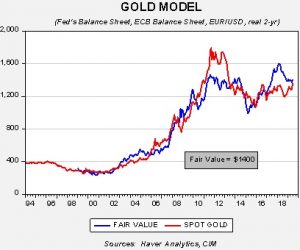 This model uses the balance sheets of the Federal Reserve and the European Central Bank, the EUR/USD exchange rate, the fiscal account as a percentage of GDP and the real two-year Treasury yield.  The model has been suggesting that gold was undervalued for the past two years.  The recent rally has closed the gap; however, as the dollar weakens and the central banks return to expanding their balance sheets, the model’s forecast will rise and support gold prices.

On a longer term basis, the unscaled level of the deficit does tend to suggest a favorable environment for gold. 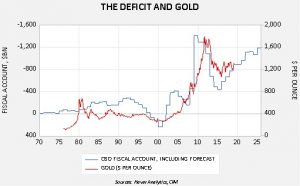 This chart shows the Congressional Budget Office’s level of the deficit (on an inverted scale) and forecast to 2025.  The body is suggesting the deficit will worsen in the coming years which has tended to be supportive for gold prices.  Interestingly enough, the mere level has the biggest effect on prices compared to scaling the fiscal account to GDP.  Most likely, the level is easier for gold buyers to understand.

With inflation low and Modern Monetary Theory becoming popular, the likelihood of rising deficits is elevated.  A position in gold is one way investors can position for a secular trend in rising deficits.