In the last FOMC minutes, policymakers signaled another hike at the upcoming June 14th meeting.  We continue to closely monitor financial conditions but, so far, financial markets are rather sanguine about the impact of policy tightening. 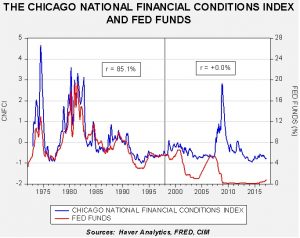 The blue line on the chart shows the Chicago FRB Financial Conditions Index, which measures the level of stress in the financial system.  It is constructed of 105 variables, including the level of interest rates, credit spreads, equity and debt market volatility, delinquencies, borrower and lender surveys, debt and equity issuance, debt levels, equity levels and various commodity prices (including gold).  A rising line indicates increasing financial stress.  The red line is the effective fed funds rate.  Until 1998, the two series were positively and closely correlated.  When the Fed raised rates, financial stress rose; when the Fed lowered rates, stress declined.

We believe there are two factors that changed this relationship.  The first is policy transparency.  Starting in the late 1980s, the Fed became increasingly transparent.  For example, before 1988, the FOMC would meet but issue no statement about what it had decided to do.  Investors and the financial system had to guess whether policy had been changed.  Starting in 1988, the central bank began publishing its target rate.  In the 1990s, it began issuing a statement when rates changed.  Eventually, a statement followed all meetings.  As the FOMC has become more transparent, the correlation between stress and the level of fed funds has changed.  Essentially, the markets now know with a high degree of certainty when rate changes are likely.  This is especially true of tightening.  The FOMC appears to avoid making rate hikes that surprise the market.

The second factor is financial system stability.  From the Great Depression into the 1980s, policymakers put a high premium on system stability at the expense of efficiency.  Bank failures were rare and there were a large number of rather small institutions.  In addition, commercial banks were separated from investment banks.  The drive to improve efficiency led to consolidation among commercial banks and a breakdown of the barriers between commercial and investment banks.  Although this made the system more efficient, it also undermined stability.  Thus, when raising rates, the Fed must pay close attention to system stability to prevent crises, which has tended to lead to gradual and measured policies; this behavior maintains stability…until it doesn’t!

Essentially, policymakers and investors face the Minsky Paradox; the more stable markets become the more risks investors take, leading to conditions that cannot be sustained.  Unfortunately, it’s hard to know in advance when rate hikes become problematic.  It is likely that as rates rise, factors that may have been manageable at lower rates become dangerous at higher rates.  Those conditions can change faster than policymakers can likely react.  For now, there isn’t much evidence of trouble but the fact that policy is tightening raises the likelihood, however small, that problems could develop.