By now, investors have rightly come around to the idea that the equity market’s strong rebound since late March can be largely ascribed to the aggressive monetary and fiscal policies put in place to counter the coronavirus crisis.  The economic downturn from the pandemic lockdown has been severe, pushing unemployment to its highest level since the Great Depression and freezing demand for most products.  All the same, the Federal Reserve’s massive bond-buying and the federal government’s gigantic spending programs have convinced many people that the public sector is doing what’s necessary to support a quick recovery and minimize the long-term damage.  Investors have bid up stocks in response.  The technology-heavy NASDAQ has even reached a new record high.

What’s gotten less attention is that the policy moves have also helped limit the damage in the debt markets.  That’s especially clear in the market for riskier debt that the credit rating firms consider to be below-investment grade, i.e., “high yield” or “junk” bonds.  One way to measure the demand for that kind of debt is to compare the yield investors are requiring for that kind of bond versus the yield on a risk-free bond of similar maturity, such as the five-year Treasury note.  As shown in the chart below, the effective yield on the BofA Merrill Lynch High-Yield Master II Index spiked to as much as 8.57% at the peak of the coronavirus crisis in March and April.  At the same time, safe-haven buying drove down the yield on the five-year Treasury note to just 0.39%.  That boosted the high-yield spread over the five-year Treasury all the way to 8.18% compared with an average spread of 5.61% over the last several decades. 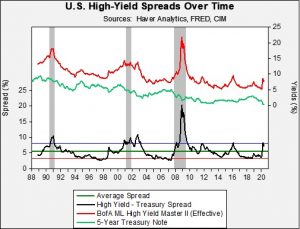 As shown in the chart, the April spread of 8.18% was one full standard deviation above the average spread since 1988.  But instead of rising even further above the one-standard deviation mark as typically happens during a recession, the spread has fallen modestly in May and June.  We think that’s a clear indication that investor nerves have been calmed by the aggressive monetary and fiscal policy already put into place.  One particularly helpful move was the Fed’s decision to purchase corporate debt, ultimately including debt that had been downgraded to junk status after March 22 and corporate bond ETFs that might hold high-yield obligations.

By pumping liquidity into the economy and helping many firms avoid bankruptcy, the U.S. policy moves have helped bolster not only junk bonds, but also investment-grade bonds and equities.  For example, the chart below shows how the spread of corporate investment-grade yields over the 10-year Treasury also initially spiked and then narrowed after the policy moves were implemented.  The pattern looks very similar to the narrowing of high-yield spreads.  Although the financial markets remain volatile and credit spreads could widen again, we think the early signs of credit spread narrowing support increasing exposure to corporate credit in portfolios. 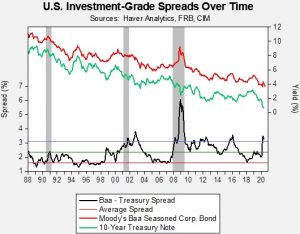