Our asset allocation process has generally favored longer duration fixed income instruments.  We have expected inflation to remain low due to continued globalization and deregulation.  Over time, low inflation brings low long-term interest rates.  In recent weeks, domestic long-term interest rates have declined significantly.  Although this isn’t a huge surprise to us, the factors behind the decline are worth examining. 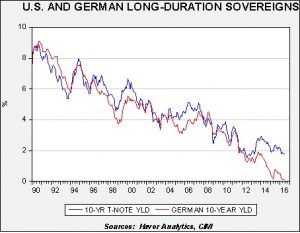 This chart shows U.S. and German 10-year sovereign yields since 1990.  The current spread is very wide; German yields have recently dipped below zero.  Why are German yields declining?  In part, low Eurozone inflation is to blame.  Despite aggressively accommodative monetary policy from the ECB, inflation remains very low.  Second, the ECB is conducting quantitative easing (QE) and has extended its purchases to include corporate bonds.  Given that German bonds are the preferred choice for European investors seeking safety, the lack of available bonds for QE has pushed German yields to historically low levels.

However, it should be noted that other factors are not quite so bullish for U.S. Treasuries. 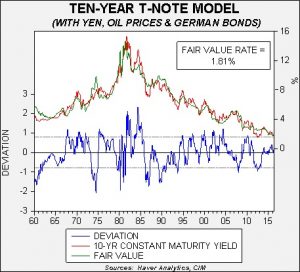 This chart shows our basic 10-year T-note yield model.  It uses fed funds, an inflation trend proxy, oil prices, the yen’s exchange rate and German sovereign yields.  The lift in fed funds and higher oil prices are factors that raise the fair value yield and so, the current fair value yield is a bit higher than the current yield.

This model suggests that the fixed income markets may be overestimating the impact of falling overseas interest rates.  That doesn’t necessarily mean that our fixed income strategy will change significantly.  At present, although the yield is somewhat overvalued, it isn’t so low as to signal an overvalued market.  The lower line on the graph, which shows the deviation between fair value and current yields, is just a bit below that level.  Based on current fundamentals, the 10-year T-note would become overvalued at a yield of 1.10%.  Thus, barring some significant change in the data, there is no reason to adjust our current allocation position.