Although gold is the primary precious metal for investors, platinum, palladium and silver also can fulfill that role.  Complicating matters is that these three metals are dual-use products.  Unlike gold, which has few uses outside of monetary (store of value) purposes and jewelry, these other three have industrial uses as well.  About 55% of silver consumption is in electronics, while 39% is used for jewelry, silverware and monetary reasons.  The remaining 6% of silver consumption is in associated industrial use, including solar panels.  Industry and automotive demand accounts for about 60% of platinum demand, with jewelry absorbing about 30% and investment demand the remainder.  Palladium, which has been in the news lately due to strong price behavior, is mostly used in automobile exhaust systems; nearly 84% of the metal goes into cars, with other industrial uses taking up nearly all the remaining demand.

Thus, unlike gold, the other three precious metals are much more sensitive to industrial activity.  Supply factors are different as well.  Silver is mostly a byproduct of base metal and precious metal mining; only about 28% of silver comes from primary silver mines.  The rest comes from the mining activities of lead, zinc, copper and gold.  Thus, the supply of new silver is affected by the demand for these other metals.  In contrast, platinum and palladium both have limited sources; nearly 75% of new supply of platinum comes from South Africa, whereas 40% of the world’s palladium comes from Russia.

Both gold and silver prices began to rally in the early part of the 2000s after being in the doldrums from the mid-1980s through the 1990s.  High real interest rates depressed demand as policy was designed to contain inflation.  But, around 2003, gold began to rally, and by 2005, silver did as well.  This rally continued into 2011 when silver prices began to fall, and gold followed in 2012.  A stronger dollar weighed on precious metals prices during this period. 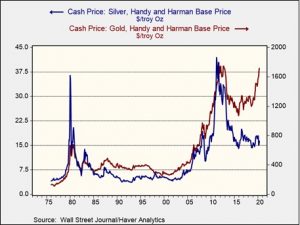 Since 2017, gold prices have clearly outpaced silver, but since August 2018, gold’s outperformance has been substantial.

The gold/silver ratio has been a longstanding way of measuring the relative value of the two metals. 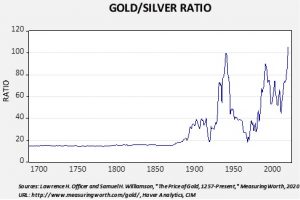 During the gold standard years, many nations conducted a bimetallic system, where gold and silver could be used for money.  The common exchange was 15:1.  The relative scarcity of gold relative to silver led to a widening ratio after the Civil War into WWI.  During WWI, silver prices rose due to expanding industrial activity for the war effort.  The change in the official price of gold by the Roosevelt administration led the ratio to widen out during the 1930s into WWII.  Steadily rising silver prices reduced the ratio to 20:1 by late 1960; in response, the Coinage Act of 1965 dramatically reduced the use of silver in U.S. coins, easing the demand for silver and causing the ratio to rise.

The end of Bretton Woods ended the last remnants of the gold standard, leading to much higher prices for both metals.  Since the mid-1970s, the gold/silver ratio has generally tracked the path of industrial production.  This relationship reflects the industrial demand for silver that doesn’t exist to the same extent for gold. 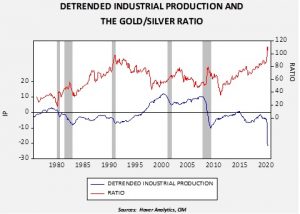 Although there remains a great deal of uncertainty surrounding the path of the recovery, as we detailed recently, the most likely path of this business cycle will be a deep but short recession followed by a lengthy recovery.  If this assessment is correct, industrial activity should rebound in the coming months.  Given the historic level of the gold/silver ratio, coupled with our overall positive position on gold, we believe silver is also attractively valued at current prices if our expectations about the economy are correct.  Therefore, for risk-tolerant investors, silver may be an attractive allocation at this time.