Last week, we discussed secular cycles in the Treasury market.  This week we will discuss equities.  The rule for secular cycles in equities is rather simple: the price/earnings (P/E) is the critical factor.  In general, profits tend to rise over time.  Driving the secular trend in equity markets is what investors are willing to pay for those earnings. 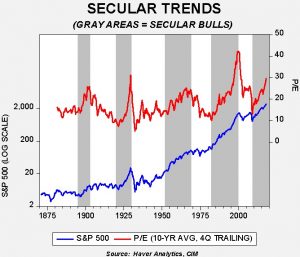 This chart shows the S&P 500 on the lower line (log-scaled) with the 10-year P/E on the upper line.[1]  Secular bull markets are shown in gray.  What generates the secular trend is the multiple.  When the P/E is rising (and the 10-year P/E generally shows the underlying trend in the multiple), equity values tend to rise as well.  Secular bear markets are characterized by flat to falling P/Es.

So, the key question is, “What drives the multiple?”  Most variables that are important are also complicated and the P/E is, too.  In general, the multiple is a sentiment indicator—it measures how optimistic equity investors are about future prospects.  Our analysis suggests that inflation plays a role as does general sentiment.

The chart on the left shows the aforementioned P/E with the 10-year rolling standard deviation of inflation.  Secular trends are shaded in gray.  Although not a perfect indicator, in general, rising inflation volatility tends to coincide with a lower P/E.  With all financial assets, inflation is an important variable.  Investors have balance sheets; in a way, inflation is the return on real assets so fears of rising inflation, expressed with rising volatility, should discourage investment in financial assets.  The chart on the right shows consumer sentiment.  Although the data is rather limited compared to inflation, it does show that periods of falling sentiment tend to coincide with P/E contraction.

There is an old saying that “bond investors don’t build hospital wings.”  In other words, equities are the best way to build wealth.  At the same time, investing in equities requires optimism about the future.  War, civil unrest, social disruption and geopolitical uncertainty should make citizens reluctant to invest.  For example, the end of the Cold War was likely a contributing factor to the steep rise in the P/E during 1995-2000.  Perhaps the relief that the Great Financial Crisis didn’t trigger another Great Depression boosted the P/E after 2008.

Our view on secular trends in equities is based on two factors—what is inflation doing and how do people feel?  Rising inflation and increasing volatility of price levels will tend to reduce investor optimism.  The perception of how society is doing will affect sentiment.  Inflation can be easily measured, while sentiment is more of an observational “call.”  At present, the secular bull market appears intact but under threat from two directions.  First, if populism gains traction then inflation will likely follow.  Second, the high level of political partisanship could eventually affect consumer sentiment.  If these trends gain strength, we may be entering into a new secular bear market in equities.  That would mean a period of steady to declining multiples.  Investors can still make positive gains in equities in such an environment, but passive investing tends to struggle during secular bear markets.

[1] The 10-year P/E is calculated by the 10-year average of nominal earnings divided by the current value of the S&P 500.  The multiple is similar to the Shiller P/E except that the latter deflates both by CPI.