One of the relationships we persistently monitor is the expectations of 10-year Treasury yields compared to the actual level of yields.  To do this, at the beginning of each year, we plot the rate forecasts from the Philadelphia FRB’s Professional Forecaster Survey.  The record of the forecasters has not been stellar. 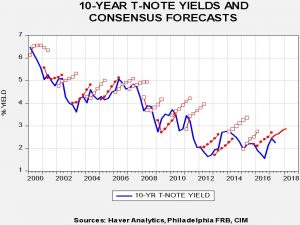 The blue line on the chart shows the level of yield; the other lines show the consensus forecasts.  The open boxes on the red lines are “misses” and the filled dots are “hits.”  The forecasters are wrong about 59% of the time.

What is interesting to us is not the error rates but the fact that the direction of the error is consistent; the forecasters expect higher rates.  We suspect a major part of this was due to forecasters overestimating inflation.  It has been our position that globalization and deregulation are responsible for low inflation, not monetary policy.  We had little faith in central bank ability to cause inflation and so we have tended to be more dovish on long-term rates in our asset allocation portfolios.

Still, we have noticed that the downtrend in rates has mostly ended in 2012, while rates have been rangebound for the past five years.  Clearly, the forecasters are looking for an upside “breakout” in yields that has failed to materialize…so far.

Our 10-year T-note yield model puts fair value at 2.10%; thus, current yields are a bit high.  The model uses fed funds, long-term inflation trends, the yen/dollar exchange rate, oil prices and the yield on German bonds.  What is troubling for us is that if we just use the first two variables of the model, the fair value yield jumps to 3.03%, which is in the neighborhood of the current Philadelphia FRB forecast.  Simply put, international factors appear to be holding down fair value yields.  A weaker yen, higher oil prices or rising German sovereign yields will likely have a negative effect on the fair value yield.  Of the three, German yields are probably the most critical.  If the Eurozone avoids financial and political problems, it appears the ECB is prepared to begin slowly withdrawing stimulus.  If that’s the case, the forecasters may have a chance of being right this year.