Over the past quarter, emerging market equities have weakened; the primary culprit was a strengthening dollar, although concerns about softer non-U.S. growth likely played a role as well.  The dollar’s strength appears to be caused by one of two factors.  The first possibility is interest rate differentials, which are partly due to the differences in economic growth.  The second possibility is that the potential of a trade conflict, which would likely reduce the global supply of dollars, is leading to the appreciation of the greenback.

The problem is that relative growth rates suggest the dollar is still somewhat overvalued. 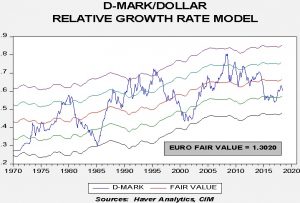 This chart shows a model using the OECD’s leading indicators for Germany and the U.S.  Converting the estimated D-mark forecast to euros indicates a fair value of $1.3020.  Since relative growth rates drive the interest rate differences, it suggests it is less likely that interest rate differences are pushing the dollar higher.  In other words, it is obvious that U.S. interest rates exceed European rates but the exchange rate has already adjusted.  At the same time, if the financial markets expect further monetary policy tightening from the Federal Reserve, the elevated value of the dollar might be justified.

On the other hand, the impact of trade restrictions is different.  The U.S. has built a global trading system that was designed for steady declines in trade impediments.  From GATT to the WTO, the U.S. has fostered this system by consistently lowering tariffs and allowing nations to run trade surpluses with the U.S.  This wasn’t a flaw in the system; a reserve currency in a fiat currency regime essentially forces the U.S. to supply dollars to the world to facilitate trade.  The persistent trade deficit does impose costs on the U.S. economy but American political leadership, up until now, was willing to absorb those costs to maintain American hegemony.

At this juncture, it is unclear if the administration intends to completely upend the postwar trading system or if its actions are designed to improve America’s bargaining position.  Either outcome is possible.  If it turns out that the former is the goal, the dollar is likely to continue to appreciate, perhaps reaching historic highs.  If the latter is the goal, then the dollar may be vulnerable to a pullback. 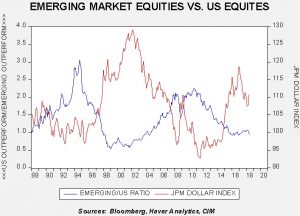 This chart shows the relative performance of U.S. equities and emerging market equities; a rising blue line indicates emerging equities are outperforming emerging market equities.  The red line shows the JPM dollar index; the two series are inversely correlated at the 77.5% level, which means a stronger dollar leads to U.S. outperformance.  That finding is consistent with what has occurred over the past quarter.

However, there is evidence to suggest the recent U.S. outperformance is excessive.  The chart below shows a regression model of the relative performance of equities with the dollar index as the explanatory variable.  The lower line in the chart show shows the deviation from fair value.  Since 2010, emerging markets have generally underperformed relative to the dollar.  This could be due to a general avoidance of risk since the Great Financial Crisis but current levels are nearly a full standard error below fair value. 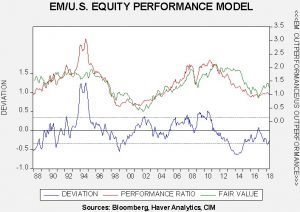 This analysis suggests that emerging markets are undervalued even in the face of recent dollar strength.  If the dollar pulls back, either because the Trump trade policy is posturing or the FOMC signals some moderation in its tightening path, emerging markets could recover.  In any case, they are attractive at current levels, although recovery will likely need a sign of policy restraint either on trade or the monetary front.