Although it’s not official,[1] it appears the current expansion has reached a new record.

This chart shows expansions by months since 1850.  The current expansion just reached 121 months, exceeding the 1991-2001 expansion, which was previously the longest.

Part of the reason this expansion has lasted so long is because economic growth has been rather slow. 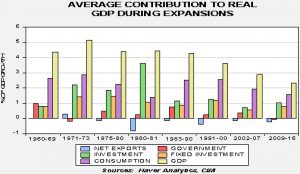 Because the expansion was slow, the bottlenecks that often develop in a long expansion have not become evident in this cycle.  Inflation remains tame, with the overall PCE deflator below 2.5%.  In previous recessions this measure of inflation had exceeded 2.5%, which would tend to trigger policy tightening. 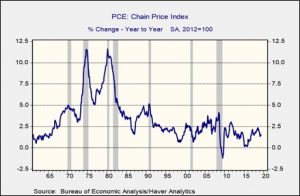 Recessions are usually triggered by either policy tightening or a geopolitical event.  The former tends to occur when policymakers are facing rising inflation.  With current inflation tame, excessive tightening would be a major mistake.   The potential for a geopolitical risk is elevated at this time but not high enough to suggest a significant defensive position.

So, until inflation rises or a geopolitical event occurs, there is no reason that the current expansion can’t last longer.  And, as long as the expansion continues, equities should continue to perform relatively well.

[1] The National Bureau of Economic Research, a private body, is the official arbiter of business cycles.  When it dates the onset of recession, it is usually months after the downturn has occurred.  Thus, it is possible (but not likely) that the group could determine that a recession began before July.  We won’t know for certain that the current expansion is the longest until the next recession starts.

[2] We break out fixed investment to eliminate the impact of inventories.  The actual calculation is GDP = Consumption + Investment + Government + Net Exports.