The pandemic has clearly affected the economy.  The decline in economic activity in Q2 will be historic.  However, it is still unclear what effects will be temporary and what will be long-lasting.  A recent paper suggests that one permanent change may be a reduction in older workers.  COVID-19 has a disproportionately negative impact on older people; studies have shown that nearly 75% of fatalities have occurred among those over the age of 65.  That age falls roughly in the middle of the baby boom generation.  Anyone born in 1955 or earlier falls into this high-risk category.

Americans working past 65 years old, at least as a percentage of the total labor force, was common after WWII.  Social Security was still relatively new.  But, from 1947 to 1985, the participation rate for Americans over the age of 65 fell from the 28.6% peak in October 1949 to a low of 10.4% in June 1984.  The number of Americans in the labor force over the age of 65 peaked at 10.8 MM in February.  It has fallen sharply since. 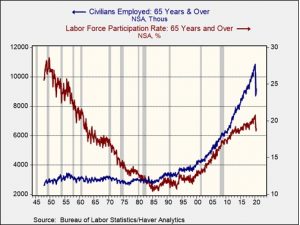 This chart shows both the actual number of civilians employed over the age of 65 and the percentage of these workers compared to the labor force of 65-year-olds and older.  Participation has been rising since the early 1990s.  Some of this rise is simply due to a rising population of Americans aged 65 years and older relative to the total population. 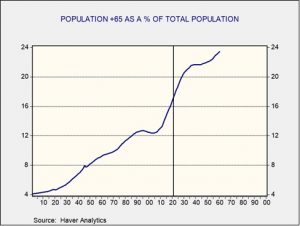 This chart shows the actual and projected level of 65-year-olds and older compared to the total population.  The percentage has been rising since 2003 and is forecast to plateau in 2040.  The entire baby boom generation will be 65 years or older by the end of the decade.

It is possible that the tendency for COVID-19 to be a greater risk to older workers may mean that the drop in employment for adults 65 and over will be lasting.  These workers have the option of taking Social Security and don’t necessarily need to take the risk of returning to work.  If they do leave the workforce for an extended period, perhaps 18 to 24 months for a widely available vaccine, employers may be less open to hiring this age of worker when a younger one can be found.

What impact would a decline in workers aged 65 and older have?  Since older workers are often paid more due to their years of service, losing these workers will, at least initially, improve margins.  It will almost certainly lead to some increased hiring of younger workers and may accelerate lowering the age of the workforce.  It may also lead these older households to lower the risk in their portfolios by reducing equity positioning.  Of course, given current paltry interest rates on low-risk fixed income, investors striving for yield will be forced to take on equity-like risk at times.  It is still unclear whether the pandemic will lead to a permanent shift, but there is a good chance it will.  Thus, we will continue to monitor this development.