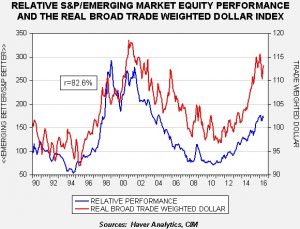 The most important factor boosting the dollar was monetary policy divergence.  The Federal Reserve ended its balance sheet expansion in December 2014.  It raised its policy rate in December 2015.  This tightening occurred while the European Central Bank (ECB) and the Bank of Japan (BOJ) both continued to implement aggressively accommodative policies.  The dollar’s strength clearly accelerated in the 2014-15 period, although the rally has stalled this year.  We believe the stall has occurred because of uncertainty surrounding U.S. monetary policy.  Initially, the FOMC signaled four rate hikes this year.  Currently, fed funds futures are suggesting no rate hikes this year and perhaps only one hike next year.  If this does become the path of policy, the dollar bull market may be coming to a close unless the ECB and BOJ become even more aggressive in policy easing.  If we are reaching the point where further accommodation isn’t possible, a stronger dollar is less likely and thus, emerging market equities become attractive given their recent relative weakness.

However, due to the uncertainty over the direction of policy, as noted above, the asset allocation committee has judged emerging market equities as only appropriate for aggressive investors.  If the FOMC tightens policy sooner or to a greater degree than expected, developed markets could begin to sharply outperform emerging markets again.  Given that market expectations are leaning heavily toward steady Fed policy, there is the potential for a bearish surprise for the emerging equity sector.  Thus, in our judgement, only the most risk tolerant investors should be considering emerging market equities at this time.