Although it’s been a long time since a president weighed in directly on the Federal Reserve’s monetary policy, such criticism is not at all unusual.  In fact, the détente is perhaps the outlier.  There is a natural tension between a government in power and a central bank.  Political leadership, regardless of whether a country is a democracy or not, generally prefers lower interest rates.  In the U.S., the Federal Reserve became untethered from the Treasury in 1951 when the White House, Congress and the Federal Reserve agreed to give the central bank independence in setting monetary policy.  Up until that point, the Federal Reserve was required to assist the Treasury in facilitating the management of Treasury debt.  However, it should be noted that President Truman was not comfortable with this change.

As inflation rose in the late 1960s, chairs of the Federal Reserve faced increasing pressure from various administrations.  President Johnson criticized William Martin for not supporting his stimulus policies with monetary accommodation.[2]  Nixon tried to replace Martin after his election in 1968, offering to nominate him for treasury secretary.  There is speculation that Nixon blamed Martin for his loss to Kennedy in 1960[3] and wanted a more compliant Fed chair.  When Martin refused to leave, Nixon eventually replaced him with Arthur Burns.  Nixon persistently browbeat Burns and, in order to ensure he would provide easy monetary policy, started a rumor that Burns was pressing for a raise when the Fed chair was publicly opposing wage increases.  Nixon then recruited Alan Greenspan to tell Burns that if he promised to keep policy accommodative, the White House would deny the rumors.[4]

Reagan was not above criticizing the Fed; in 1980 his government issued a statement warning that the Fed’s independence “should not mean lack of accountability” and that Congress should “monitor the Fed’s performance.”[5]  Reagan strongly considered not reappointing Paul Volcker.[6]  Volcker left the Fed in 1987, surrounded by governors appointed by President Reagan who were in the habit of dissenting with his decisions.

Even Alan Greenspan, who for a period took on a persona of “the maestro,[7]” faced heavy criticism from the Bush administration as he refused to cut interest rates; he was even called “creepy.”[8]  George H.W. Bush blamed Greenspan for his defeat by Bill Clinton.[9]  The current détente between the Federal Reserve and the White House came when Robert Rubin, the director of the National Economic Council, convinced the president that the Fed’s policy decisions should not be questioned.[10]  Rubin argued that if the Fed could establish inflation-fighting credibility and reduce inflation expectations, then long-term interest rates would fall and the economy would prosper.

President Trump has clearly ended that detente.  Does that mean anything in the very short run?  Probably not.  We still expect four more rate hikes; the Eurodollar futures market hasn’t changed its assessment of the current policy path.  But, the criticism will likely increase with each rate hike and it will begin to affect policy at some point.  In fact, Chair Powell faces a difficult future.  Every rate hike will prompt unfriendly comments from the White House.  Once easing starts, Powell could face charges of acquiescence to Trump.

For markets, concern about the Fed eventually manifests itself in rising inflation expectations.  Actual inflation is based on the intersection of aggregate supply and aggregate demand.  Since 1978, deregulation and globalization have shifted the supply curve away from its origin and likely flattened this slope as well.  These factors have led to persistently low inflation.  The role of the central bank is more about managing inflation expectations.  Since Volcker, the Federal Reserve has made it clear that it won’t tolerate or accommodate sharply rising price levels.  The combination of credible monetary policy and rising productive capacity has led to disinflation and a steady decline in long-term interest rates. 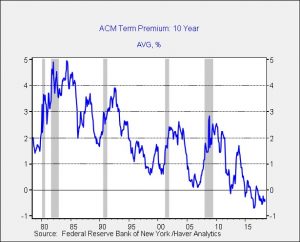 This chart shows a calculation of the term premium on 10-year T-notes.  The term premium measures how much more yield investors demand for holding longer term notes.  In other words, an investor could simply buy a one-year T-bill each year for 10 years or a 10-year T-note.  Usually, the longer duration instrument carries a higher yield because there are risks that rates could rise in the future, lowering the price of the T-note.  Simply put, the term premium is an attempt to measure the market’s estimate of the riskiness of owning long-duration debt.  As the above chart shows, the current term premium is negative, suggesting investors would much rather own the long-duration instrument and are willing to accept a “discounted” rate.

Undermining the Fed runs the risk of reversing this term premium, which would lead to a steeper yield curve and higher interest rates.  So far, that has not occurred.  There are a couple reasons for this lack of movement.  First, the deregulatory policies of the Trump administration are disinflationary. Thus, the inflationary impact from trade impediments may not be as large if the economy can still enjoy the unfettered introduction of new technology.  Second, the term premium is mostly a function of inflation expectations, which take a long time to evolve.  Milton Friedman argued that inflation expectations are set over decades.  Thus, for now, we don’t expect a major increase in long-term rates.  But, the potential risks are rising.  Investors should be wary of long-duration positions and consider bond laddering.