How much attention is the FOMC paying to international factors?  It appears to be quite a lot.  We have documented that the financial markets are clamoring for a rate cut.  We have seen some of the more popular yield curves invert and the implied LIBOR rate from the Eurodollar futures market, two years deferred, has moved into easing territory.

The chart on the left shows the aforementioned implied LIBOR rate.  In Q3 last year, the implied rate was 3.30%; it has fallen to just above 1.60%, a decline of 170 bps.  The chart on the right compares the implied rate to the fed funds target.  When this implied rate falls below the target, it is a signal to policymakers that monetary policy is too tight.  The Bernanke Fed mostly ignored this indicator, unlike his predecessor, and Bernanke had to deal with the deep 2007-09 recession.  This indicator is giving clear evidence that the Fed should be cutting rates aggressively.

However, the signals from the domestic economy are not supporting a rate cut.  The ISM Manufacturing Index is well above 50; since the Federal Reserve began confirming the policy rate, it is rare to see rate cuts when the index is above 50. 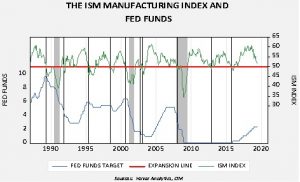 We have indicated when the ISM index falls below the 50-expansion line with vertical lines.  The only time we saw significant rate cuts without the ISM index below 50 was in 2007, when financial markets were under clear stress.  In May 2007, the Chicago FRB National Financial Conditions Index, an index of financial stress, was reading -0.67.[1]  By August, it had risen to -0.13 and turned positive in November.

In this cycle, international pressures seem to be guiding policymakers to act. 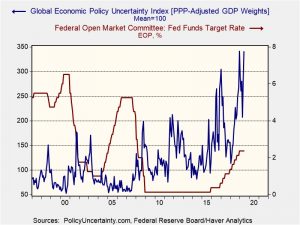 This chart shows the fed funds target with the Global Economic Policy Index.  This index measures mentions of economic or policy uncertainty in 20 nations; the index is weighted by GDP, adjusted for purchase power parity.  A rising reading suggests increases in policy uncertainty.  This chart supports Chair Powell’s continued references to overseas issues when calling for easing.

To some extent, there is a worry among market participants that the Fed is simply creating a narrative to allow it to ease, reducing pressure from the White House while maintaining some element of independence.  The third chart suggests the Fed does have good reasons for acting to lower rates.  With trade wars, the immigration crisis in Europe and the U.S., the potential for conflict in the Middle East and worries about a currency war, the level of global policy uncertainty is historically elevated.  This factor, we believe, reflected in the financial markets, is what is prompting the desire to cut rates.  We do expect a significant level of dissent among FOMC voters but, in the end, we look for two rate cuts this year, unless global stress levels unexpectedly diminish.

[1] A reading under zero suggests low levels of stress.