In the most recent rebalance of our Asset Allocation portfolios, we introduced positions in gold.  Although the yellow metal is classified as a commodity, we view it more as a currency, admittedly one that is not backed by liabilities.  National fiat currencies are generally created in the credit process and are backed by the trust imbedded in the nation’s debt.  Currencies have three roles: medium of exchange, unit of account and store of value.  Gold does not act as a medium of exchange in a modern economy.  But, it can be used as a unit of account and it mostly excels as a store of value.

Because it isn’t liability backed, the opportunity cost of holding gold is essentially equivalent to inflation-adjusted interest rates.  If one holds gold in lieu of short-term debt, the lost opportunity is the interest earned after inflation.  History does suggest that there is an inverse correlation between real interest rates and gold. 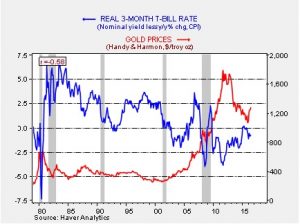 This chart shows real T-bill rates and the price of gold.  Note that gold prices have increased as real rates have become persistently negative.

The other factor that affects gold is the dollar.  Since gold is priced in dollars, a rising greenback makes gold prices more expensive to foreign buyers.  Since a stronger dollar is often associated with rising U.S. interest rates, a stronger dollar tends to be bearish for gold. 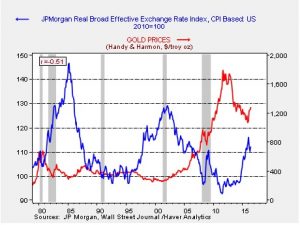 Since inflation, interest rates and exchange rates affect gold prices, we have created a model of the relationship. 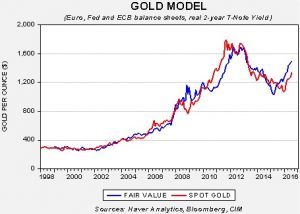 The model uses the EUR/USD exchange rate, inflation adjusted two-year T-note yields and the balance sheets of the European Central Bank (ECB) and the Federal Reserve.  Including the latter two variables generally accounts for investor expectations of future inflation and interest rates.  The current fair value for gold, based on this model, is $1,489.26, suggesting that current prices, though elevated, are not overvalued.

Finally, investors have been putting money into gold through exchange-traded products. 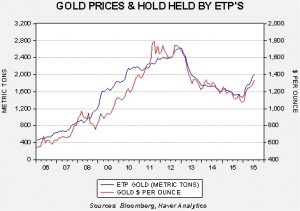 This chart looks at the metric tons of gold held by ETFs, ETNs and grantor trusts compared to the price of gold.  As one would expect, the two are closely linked, correlating at nearly 95%.  Since the beginning of the year, investors have been increasing their exposure to gold through these products.  With the FOMC on hold and additional policy stimulus expected due to Brexit, investors are seeking the safety of gold.