(Due to the Independence Day holiday, there will not be an accompanying podcast and chart book this week. The multimedia offerings associated with this report will resume next week, July 9.)

The Wall Street Journal Dollar Index, which tracks the dollar’s value relative to seven major currencies, has fallen nearly 10% since March 2020. Generally, when the dollar weakens it leads to an increase in the price of U.S. imports and a decrease in the price of U.S. exports. The drop in export prices may be good for U.S. exporters in the long term, but the rise in import prices may have a negative impact on consumers. For example, the recent rise in gasoline prices can at least be partially explained by the depreciation in the dollar. The rise in import prices has posed a dilemma for many U.S. firms that rely on imports. They can choose to raise prices and risk losing market share or they can maintain prices and accept smaller profit margins. In this report, we discuss how a weaker dollar may contribute to inflationary pressures. 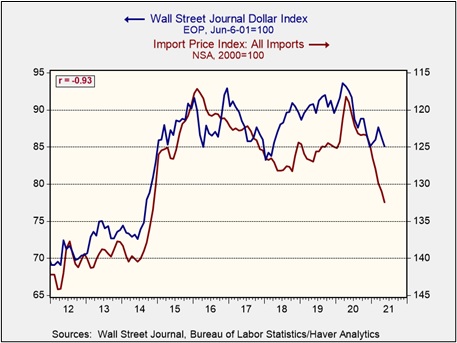 Most trade is contracted and settled in U.S. dollars. As a result, it is relatively easy for Americans to purchase foreign goods and services from abroad. In the year ended in March, the value of imported consumer goods, automobiles, and food and beverage was equivalent to more than a quarter of all U.S. consumption spending. That being said, this dynamic does not always favor U.S. trade partners. Because trades are primarily transacted in U.S. dollars, exporters to the U.S. bear most of the currency risk. This is especially true in the initial stages of currency depreciation as contracts prevent foreign exporters from adjusting their prices in response to the weakening dollar. Exporters are initially forced to absorb the currency depreciation through narrower profit margins, all else being equal. As sales are implemented over time, however, the foreign exporters are able to adjust their prices. In other words, import prices are sticky in the short-run but flexible in the long-run. The impact currency has on trade can be seen in changes to a country’s balance of trade.

In the initial stages of currency depreciation, U.S. importers are incentivized to buy more goods and services before the contract ends, thus leading to an increase in imports. At the same time, U.S. exports remain stable as it takes time for firms to expand production to meet the new demand. The trade balance therefore tends to weaken. Over time, however, the decline in the trade balance reverses as consumers find alternatives to the more expensive imports and exporters are able to expand their capacity to meet the increase of foreign demand. The initial decline followed by an upward swing in the trade balance is referred to as the J-curve effect. 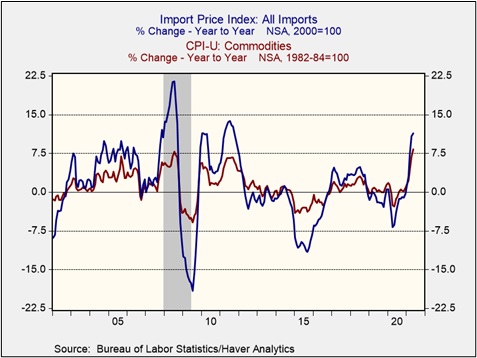 Although we are confident that the dollar’s depreciation has contributed to the rise in inflation, we still believe supply shortages and stronger demand are the primary drivers. However, if we are wrong, this would likely mean that elevated levels of inflation may be around longer than we have anticipated. In this case, the Fed would likely be forced to raise rates earlier than it has forecast, which would be bullish for the dollar and bearish for commodities.