One of the burning issues about the current path of policy is its inflationary impact.  In other words, will the massive increase in fiscal spending and the Fed’s balance sheet lead to higher price levels?  To discuss this issue, we return to the equation of exchange:

The money supply times velocity is equal to the price level times goods and services produced.  This equation is an identity; simply put, it will always be true.  But, the direction of causality of the variables comes from theory.  Classical economists and their philosophic progeny, monetarists, argued that V and Q were fixed, so changes in price levels were due to changes in money supply.  Keynesians and their most recent variation, modern monetary theorists, argue that Q can be below its capacity and V is variable, so increases in M may not necessarily lead to higher price levels but could result in a decline in V or a rise in Q.  Essentially, the Keynesians and their modern versions argue that if Q is below capacity, increasing M can boost the economy without triggering inflation.

The problem with both of the major theories is that there is a psychological element to the equation that tends to be downplayed.  The problem for the Classical construct is that even at full employment (Q) rising M might simply lead to falling V.  Complacency about future inflation or fears about the future growth path of the economy might lead households and businesses to simply hold larger cash balances.  Confounding the Keynesians is the potential outcome where P rises even with Q below capacity when M is increased if economic actors fear future inflation.  In fact, higher price levels can result even without a rise in M if V rises.  The most extreme case of this condition is hyperinflation, where V rises rapidly as households and businesses rush to convert cash to real goods that will hold their value.

Therefore, determining if there is an inflation problem from current policy is tricky because there is a psychological element that is difficult to estimate.  It is easy to measure money supply, output or price levels, but the psychology of velocity is hard to measure and potentially prone to sudden shifts.

Reframing the question can simplify this problem.  If a household receives a notable sum of money, let’s say, $10,000, what does it do with it?  If the householder fears future price increases, it would make sense to use that money to buy inventory.  In other words, they may take part of it to buy food, perhaps consumer durables, art, gold, or other items that might hold their value.  On the other hand, if there is little fear of future inflation, the household may be content to simply hold the cash as savings or place it in other financial assets.

One way to answer this question is to compare the money supply to gold prices.  If some money supply, say, M2, rises faster than gold, it would suggest that economic actors are not afraid of future inflation.  A rising ratio of M2/gold would be a positive signal for financial assets; on the other hand, a falling ratio would likely be bearish.  Now, it is possible that a contracting money supply could distort the measure.  The monthly change in M2 since 1959 has only been negative 4.4% of the time.  Over that same time frame, it has never been negative on a yearly change basis. 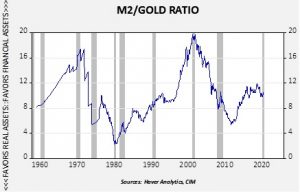 Anyone familiar with financial market history can note that equity markets tend to outperform when this ratio rises, but equities tend to suffer when the ratio declines.  The ratio captures that when the supply of money is rising relative to gold (the proxy for real assets), economic actors tend to put this excess liquidity into financial assets.  A declining ratio suggests a preference for real assets.

In general, the ratio has been mostly steady for the past four years.  Despite a rally in gold, the ratio hasn’t declined.  Put another way, we haven’t seen households and firms show significant inflation fears despite a massive increase in liquidity.  Gold prices have been mostly rising with M2 but not accelerating faster than the money supply.  And so, in a portfolio, gold has been acting as a diversification asset without unduly hampering performance.  As the Fed has boosted liquidity, funds have been going into both stocks and gold at a pace where neither has signaled a particular bias.  If inflation fears escalate, we would expect this ratio to decline and equity markets to show signs of weakness.  But, for now, easy monetary policy is supportive for both gold and equities.